Congratulate Amulya! She finally got a job at Sarthak's start-up. Find out what else happened, here! 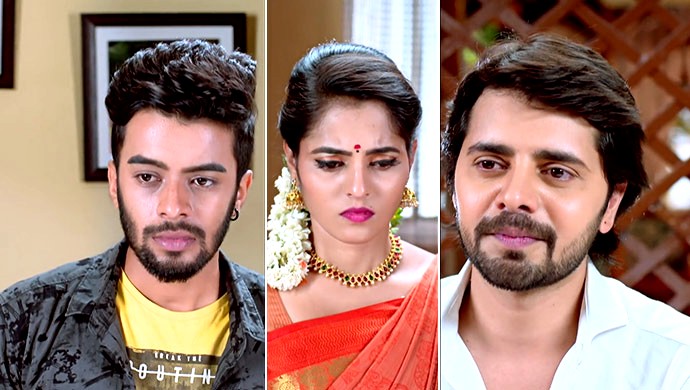 The newest show in Zee Kannada’s roster is Gattimela, stars Nisha Ravikrishnan aka Amulya Manjunath and Rakshit aka Vedanth Vasishta. With the fastest gained fan-following, this show has already started enjoying one of the top three spots in the list of awesome primetime shows that we have!

So what’s keeping the audiences hooked onto this show? It is the sakkath story coupled with awesome talent in the form of cast and crew. Since many of you probably might have been busy last week and weren’t able to catch up on the episodes, fret not! We have a compiled list of 5 best and major high points from last week in Gattimela.

1. Manjunath comes home to give everyone some good news. Aarthi, however, isn’t pleased.

The Manjunath sisters, Aarthi and Amulya, have a troubled night for individual reasons. Sarthak and Aadya come to visit the Manjunaths’ in the morning giving everyone a pleasant surprise. While Amulya gets a chance to give an interview at Sarthak’s start-up, Manjunath’s good news about a prospective groom leaves Aarthi in a state of shock. On the other hand, Sarika, who fakes being guilty of what she did to Parimala’s family, gets an evil idea when she hears Manjunath’s news.

2. While visiting the temple, Vicky confronts Aarthi about their feelings for each other, but in vain.

Aarthi tries to go to the temple alone to meet Vicky, but because of Sarika, ends up getting accompanied by Parimala and Amulya. Somehow, Vicky takes her to a corner to confront her about how she feels about him. While the conversation doesn’t last long, their mushy moments will remind you of young love!!

3. Elsewhere, Amulya’s day gets from bad to worse and then again settles on a piece of good news.

Amulya’s bike, Rani, gives hath on the way to her interview. As if that wasn’t enough, she then crosses path with her ‘Sunthi Shankara’ (as she calls him) and matters get worse. After somehow making it to the interview, while she is waiting, Vedanth and her meeting are somehow avoided thanks to fate. In the end, she rejoices her confirmation of the job by savouring some Nellikai.

4. Thanks to Sarika, Vicky ends up at the Manjunath house and is in for a shock!!

Sarika, who wants to create misunderstandings between Vicky and Aarthi, calls him to the Manjunath house on purpose. An awkward moment arises when Vicky, Aarthi and Gautham (Aarthi’s prospective groom) are all in the same room. All goes well until Aarthi asks for more time to think about the proposal. This angers Parimala to a great extent.

5. Aarthi and Vicky’s mishaps occur at the same time but at different places!

After Amulya and Manjunath calm an irate Parimala down, Aarthi rushes to her room. Elsewhere, Vicky gets upset with the events that transpired at Aarthi’s home and ends up in a mishap. While Aarthi locks herself in, Vicky meets with an accident from Vedanth’s car. Will their love story have a happy ending?

To know what will happen, keep watching the show Gattimela, streaming only on ZEE5.

Mayuri Kyatari And Vasishta Simha's Chemistry In The Film 8MM Bullet Is Worth Every Second. Click Here To Watch It On ZEE5

Did You Know That SRGMP Season 15 Runner-Up Hanumantha Is Selected As A Brand Ambassador?