Gattimela Sisters Play The Game Of Genes This Weekend!

While last week had guests from Jothe Jotheyali, this week welcomed the three sisters of Gattimela - Anjali Aarthi and Adithi. More details inside. 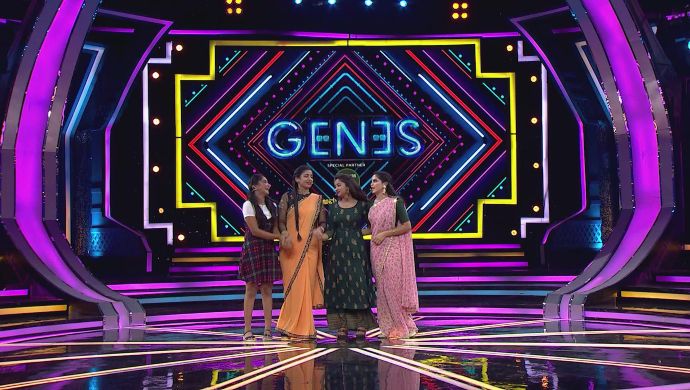 In the previous episode of Genes, Meera and Keshav Jhende of Jothe Jotheyali were introduced as the guests for the evening. The three talk a little about the show, where Sushma asks them about their roles in the serial, and how they play a negative role in Anu’s life. The next episode welcomed the very dashing Chiranjeevi Sarja and new-age actress Tanya Hope, who have come to promote their new film Khakii. The actors talk the same, in detail.

The show was welcomed by our all-time favourite host Sushma Rao. Doesn’t she look gorgeous as ever?

Sushma also welcomed Vasishta N. Simha and Manvitha Harish as her guests for the evening, whose next film India Vs. England will be in theatres very soon.

With three set of parents on one side and five children on the other, the cute on-screen couple was asked to guess which child belonged to which set of parents with Manvitha doing exceedingly well in this round.

The two also have a light moment while guessing who the parent of actress Rakshitha was and we must say, that Vasishta was not in his simha form, as they guessed the absolute wrong answer during this round! Well, this was a fun show with the two actors having a great time nevertheless.

The next episode of the weekend was filled with excitement because the guests for the evening were three sisters from your favourite show Gattimela! These included Adithi, Aarthi and Anjali from the Manjunath family and we can assure you this episode is a must-watch.

An interesting round played by the sisters is the ‘Celebrity Album’ one, where there were five celebrities with five of their respective relatives and the sisters, are required to guess which celebrity belongs to which relative.

In between the show, Anjali also shared a very emotional moment with her brother whom she least expected to be on the show. Well, moments like these is what makes Genes so special!

The three sisters had a fun time with the rest of the participants.

Kamali Actress Yashaswini’s Special Moments With Her Doggie Coco, Will…

Valentine's Day Special: 3 Starters You Can Make For Your Partner On This Occasion!