Sahithya, desperate for the job, decides to go back into the interview room 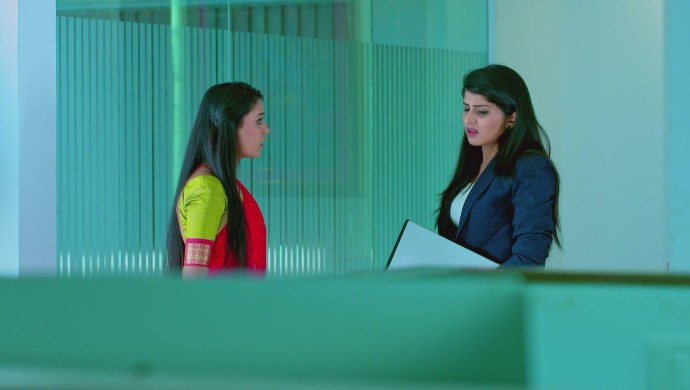 In the previous episode, Vedanth and Amulya begin to talk to each other without knowing the real identity of one another. Amulya uses the identity of a girl named Sahithya and on asking to send a picture of herself, Amulya ends up sending the picture of that girl. The next day, a new candidate appears in the office for a placement who turns out to be the real Sahithya.

In today’s episode, Amulya tries to save herself from getting caught of having sent the picture. She tries to get Sahithya out of Vedanth’s office but gets sent out. Vedanth is angry that a potential employee has played a prank with him. Sahithya doesn’t understand what the confusion is all about. By the time, Amulya calls her out of the office, saying that there is an issue with her documents. She takes Sahithya out and tells her the truth of the picture sent. Sahithya , desperate for the job, says she’ll handle the situation and goes back into Vedanth’s office. Vedanth is even more angry but Sahithya says it was all a joke and apologises for the same. Meanwhile, at Amulya’s home, Aarti’s husband is experimenting with colourful clothes. Aarti and Amulya’s sister are laughing at his outfit. He feels bad but they console him and tell him that anyone can wear anything in Bengaluru.

It is lunch time in the office and Sarthak, Kanta, Amulya and Vedanth are having lunch together. Vedanth refuses to sit next to Amulya. As his grandmother and Adya have come to office, they see Vedanth feeding Amulya.  Kanta realised that the two are pretending to be a couple when they both try to convince his grandmother how fond they are of each other.

Catch all the episodes of Gattimela exclusively on ZEE5

Gattimela 2 December 2019 Preview: Vedanth Asks Amulya To Be His Girlfriend

Jothe Jotheyali To Gattimela: 4 Zee Kannada Shows That Have Taken Over The TRP…
+
Explore More