Gattimela Actress Nisha: Amulya’s Character And My Real-Life Personality Are Dead Opposite

In an EXCLUSIVE interview, Nisha Ravikrishnan talks to us about her journey on the show Gattimela and her co-star Vedanth amongst other things. 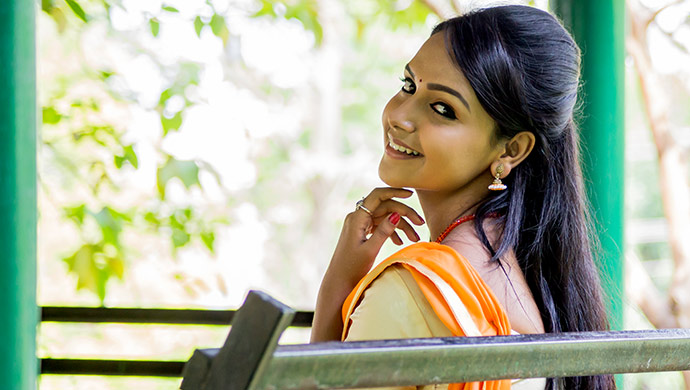 Gattimela is a superhit show that revolves around Amulya Manjunath and Vedanth Vashishta, who belong to opposite financial classes in the society. If you aren’t already in love with the show, I’ll give you only one reason, the killer fights between the lead-duo, that will make you ROFL if not getting romantic feels. Not to forget, their intimate moments are guaranteed to make your heart skip a beat. Starring in the lead roles is Nisha Ravikrishnan as Amulya and Rakshit as Vedanth. Recently, the entire cast and crew went on a Jaathre to Raichur and were met with love by the audience.

To reduce your curiosity to know more about your favourite stars we first spoke to Nisha herself and got a chance to take some exclusive bytes from her during the interview. If you are a fan, keep scrolling…

Q. What is your chemistry with Vedanth Vashishta?
A. As you all can see, we are always fighting and we can’t stand each other. But that is on-screen. Off-screen we are great friends. We do full maja on sets and it’s always fun. Even my character, offshoots everyone tells me they love the fights I have with ‘Shunti Shankra’. We both, however, are always chilling and relaxing together on-sets.

Q. Do you find any difference between Amulya and Nisha?
A. Well, Amulya’s character and my real-life personality are the dead opposite. While Amulya is an extrovert, I am more of a non-talkative person. I do speak, but not like Amulya’s constant chit-chat. Even though I am the silent kinds, I love mingling with everyone. So basically, unlike Amulya’s social nature where she talks loudly and speaks to people, in reality, I don’t do much of all that.

Q. How has your journey been on the show till now?
A. The first serial I worked in was Sarvamangala Mangalye on Star Suvarna. Before that, from 6th-10th grade, I anchored on Chintu TV. Then for two years, I continued anchoring, in order not to lose touch with the practice. After that, I gave a lot of auditions for serials and finally got selected for Sarvamangala Mangalye. On the show, I played the role of Chandan’s sister. After the show, I got selected for the Zee Kannada show Paaru, but couldn’t accept the offers for personal reasons. Finally, I got selected for the role of Amulya in Gattimela.

Q. What do fans think of Amulya?
A. Many fans keep coming to me and praising the character of Amulya. They say that so many women around the state feel empowered because of my onscreen character. Additionally, they praise me for being a role model for many women who are scared to go out and work. When it comes to my chemistry with Vedanth, they like the healthy game of fighting we do. For example, when Vedanth stops me for something, the way I stand up to him is what fans really appreciate. Personally, when I hear such comments, it makes me extremely happy. This role especially has given me immense happiness because I don’t speak so much in real-life at all. In the beginning, it was difficult to say dialogues at such a speed, but now I think of it as normal for Amulya’s character and just go for it!

Are there any questions you would like to ask Amulya Manjunath or Nisha Ravikrishnan? Write in your comments and leave it in the space given below with #Gattimela.

Watch your favourite Kannada movies, streaming now on your ZEE5.

Click Here To Watch Panchatantra, If You Like Movies With A Strong Moral, Streaming For Your Entertainment On ZEE5

12 EXCLUSIVE Pics Of Ashok Kumar And Shankar Bidari, The Next Two Guests Of Ramesh Aravind