On the next episode, Kantha is puzzled to see his 'women-hating' boss show a lot of concern for Amulya and sees him holding her by the arms too! 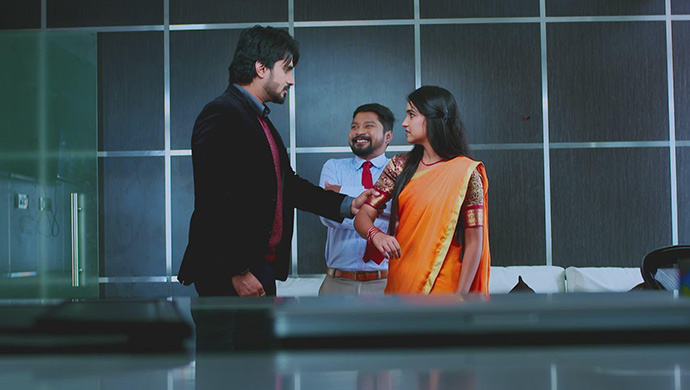 In the previous episode of Gattimela, Vedanth doesn’t rest until Ammu’s name is cleared in front of her parents. As Vedanth is leaving, he and Amulya share an emotional moment through their eyes as they bid farewell to each other. Later at home, Suhasini tries to find out if Vedanth is involved with any girl from Vicky, but all he tells her is to remove such silly thoughts from her head. At night, after Amulya and her parents make up for the fight earlier, she later calls Vedanth and thanks him for helping her.

On the next episode, as a confused Kantha is watching, Vedanth grabs hold of Amulya’s arm and scolds her about who she thinks she is. Vedanth goes on by yelling at Ammu stating that she gave him a fright and he was worried about what would happen to her. As they are staring at each other, Kantha goes in between them and laughs loudly before calling out to his boss and breaking their romantic bubble. The scene gets awkward very fast.

Does Kantha suspect his boss’s feelings towards Amulya? What is happening between them? We’ll know only if we stay tuned, won’t we?

I Had Absolutely No Plans Of Doing Anything Else: Gattimela’s Rakshit On…

Watch The Exciting 'Challenge Round' That Took Place On Dance Karnataka Dance Family War 2 Last Weekend, Only On ZEE5