On tonight's episode, Amulya is surprised when Pari informs her that she has invited Vicky and Vedanth. Later, Vedanth offers to make Ammu have coffee 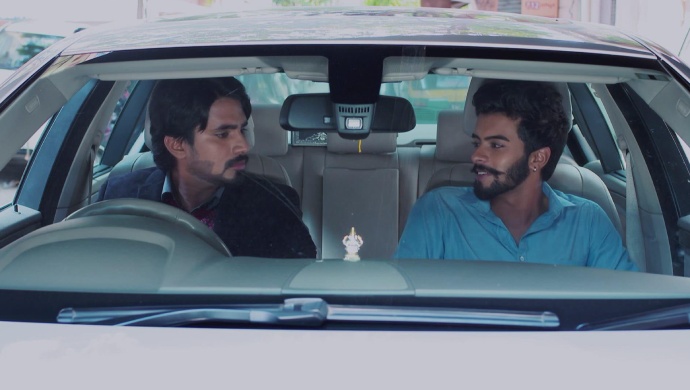 In the previous episode of Gattimela, Vedanth fights to get Ammu’s name is cleared in front of Manjunath and Pari. While leaving, Vedanth and Amulya share an emotional moment as they bid farewell to each other. At home later, Suhasini tries to learn from Vicky if Vedanth is involved with any girl, but gets no proper answer. In the night, after Amulya and her parents console each other about the fight earlier, Ammu later calls Vedanth and conveys her gratitude for helping her.

On tonight’s episode, when Amulya calls up Vedanth and thanks him, he tries to divert the topic by saying that there is nothing special about that, and if it were any lady, he would do the same. Amulya dismisses this and snaps back at him saying if this wasn’t the case he wouldn’t have waited outside her house to check who the guy she will be marrying. Vedanth then comes back to reality and scolds her before keeping the phone.

After he keeps the phone, Amulya realises that she has forgotten her other side (the one who secretively romance-texted Vedanth to get him to agree for marriage) and decides to speak to Vicky about it. At home, Vicky tells his agraja that he is texting his dream girl, causing Vedanth to smile and shake his head in hopelessness. At home, Adithi asks Amulya why she troubling Vedanth like this and the latter replies with the truth about how Suhasini is playing a double-game with them.

Then, she sends a love message to Vedanth, who wakes up from his sleep to check the message. He is upset to see that the unknown women and said ‘I Love You’ in the message while Adithi looks at the message her sister sent and watches Amulya in disbelief. The next day, as Parimala arranges the idols of the Gods for the Dasara Habba, Amulya asks for coffee to go to work fast.

When Parimala tells her not to go today one day, Ammu blames it on Vedanth’s annoying discipline of come on time and leaving on time. To this, Parimala defends Vedanth and tells her daughter about what a great man he is to have touched her feet to defend Ammu. While initially Amulya agrees with her mother and calls Vedanth a wonderful human being, she soon snaps out of her bubble and tells herself that he is not Vedanth Vashishta but he is Vedanth Kopishta and Papishta.

Elsewhere, Vedanth gets upset with Vicky for asking him to tag along to the pooja at the Manjunath house. When Vicky tells him that Parimala has invited both of them, Vedanth gets excited and confessed that he should have said so first. This makes Vicky wonder if Vedanth is showing care towards Pari because she is Aarthi’s mother or possible because she is Amulya’s mother. At home, a sleepy Adithi soon gets into a fight with Amulya for rejecting Aarthi’s request to help them bring the remaining vessels from the house.

Aarthi, who is helping Amulya wash the vessels, tries to make peace between the sisters and tells them to continue with their work till she quickly runs some errands and returns. At the Ashwath house, just as Sarthak is about to get romantic with Aadya, she reminds of the Ayudha Pooja that is taking place at Parimala’s house and asks him to get ready soon much to his disappointment. Meanwhile, as they are headed to Aarthi’s home, Vicky spots her and tells Vedanth to go home on his own as the person he came to meet is right in front of him.

When Aarthi tells him that Amulya will keep him company at home, Vedanth curses his luck for seeing the Bajaari early in the morning. He soon reaches the Manjunath house and finds it amusing when Amulya shows love to Adithi, who bangs her sister’s cup of coffee on the ground and asks her to drink it before it gets cold. Just as Vedanth is shaking his head thinking that Amulya doesn’t even excuse vessels from facing her wrath, she asks Adithi to make her drink the coffee as she has soap on her hands.

In the end, when Vedanth brings the coffee to her she looks at him, speechless.

Why did Vedanth agree to make Ammu drink the coffee? What will be Amulya’s reaction to this? Stay tuned to tomorrow’s episode to find out.

Premier Padmini Movie Review: Jaggesh-Pramod-Vivek Prove To Be The Stars Of The…