Aarthi explains to everyone that although she loves Vicky, getting married in secret is wrong. Also, Sarika smells a rat when Vicky comes home jolly! 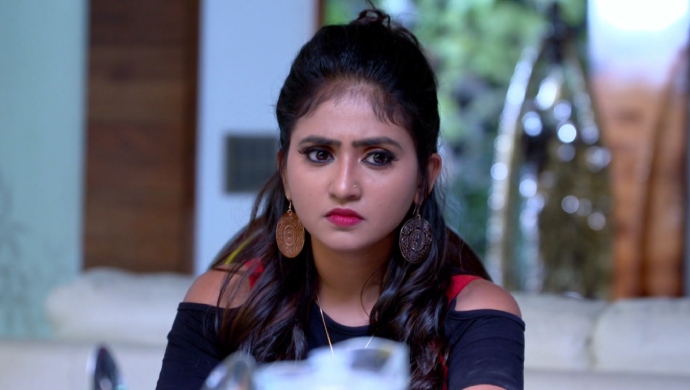 In the previous episode of Gattimela, Aarthi is shocked when she learns from Vedanth that they have come to attend her wedding with Vicky. Upset, she attempts to leave the temple but Vicky stops her from leaving by saying that God should be the one to choose their fate. His plan works and the Manjunath sisters make Aarthi next to Vicky at the marriage altar. Elsewhere, when Parimala and Manjunath are asked to bless a young couple who is getting married without their parents’ blessings, they disappointedly try to advise them against it. Later, the priest asks Vikranth to tie the taali around Aarthi’s neck.

On tonight’s episode, Aarthi explains to Vedanth after calling him ‘bhava‘ (brother-in-law), that neither of their parents’ have brought them up this way, that they take the drastic step of doing things in secret. She then clarifies that she loves Vicky, but she loves her parents a little more than him, so getting their blessings is imperative. Aarthi then goes to Amulya and informs her that what she did was absolutely wrong. Finally, she explains things to Vicky and tells him to think of a way to convince everyone in their family. Saying this she takes her sisters and leaves. Vedanth gets upset about Aarthi’s behaviour and tries to change Vicky’s mind about her, but fails miserably.

Towards the evening, Parimala and Manjunath return home tired and explain why they got delayed. When they talk about seeing a couple who were getting married without their family’s consent, Aarthi breaths a sigh of relief for not taking the wrong step. She then reassures her mother nobody in their house will take such a step, much to Parimala’s relief. Soon, a guilty Amulya goes to apologise to Aarthi. The two sisters then share an emotional moment about the crises averted.

Elsewhere, Suhasini calls Vedanth and Vicky for food and is thrilled to see her younger son so happy. Sarika, who watches him from a distance is puzzled why Vicky is so happy. After finishing up his meal when Vedanth prepares to leave his little brother too follows suit. This causes Sarika to confirm her suspicions because she wonders how someone who claimed ‘he didn’t want to leave the house‘ is happily going somewhere. At the Manjunath house, despite Parimala’s questions, Amulya leaves a bit of a hurry claiming she has some important work somewhere. As she is leaving she gets irritated to see Sarika in their house.

After chatting for a bit, Sarika gives Parimala the good news about Aadya’s pregnancy and soon Aarthi knows too. Excited, when she goes away to make sweets and savouries for Padma and everyone else, Sarika gets to the point. She tells Aarthi that she has noticed some drastic changes in her. This leaves the latter puzzled!

What does Sarika mean to say? Where did Amulya go in such a hurry? Want to know? Stay tuned!

The ZEE5 Original Series Rangbaaz Is About A Dreaded Criminal Of The 90s. Click Here To Watch It In Kannada Now!

Gattimela 10 May 2019 Preview: Amulya Goes To Vedanth's Office To Make An Announcement