In this episode, Vedanth follows Sharada to her house and assumes that he has taken proof against Gautham. Will he be successful? Read to find out. 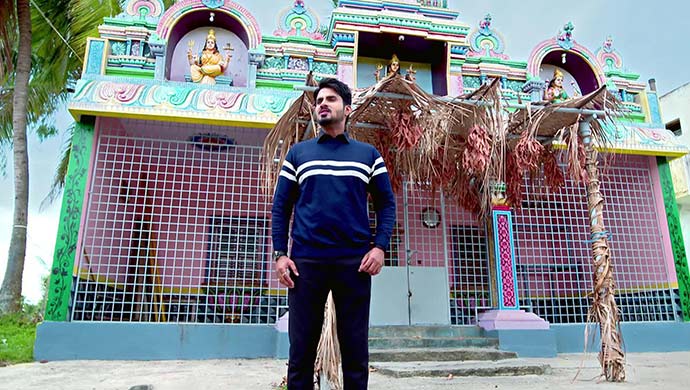 In the previous episode of Gattimela, Parimala gets a mild heart-attack while spending time with her family but decides not to worry anyone about it. Amulya notices her mother’s strange behaviour and probes into the matter but her mother gives the excuse of wedding stress. Meanwhile, Vedanth makes a plan with Sarthak and Vikranth about how to prevent Paramananda and Suhasini from coming to the Manjunath house on the day of Aarthi’s wedding. Vedanth soon follows Gautham and finds out his exact address. Elsewhere, Parimala makes Amulya promise that she will take care of the whole family if something happens to her.

On tonight’s episode, Vedanth goes to Sharada’s house dressed as an electrician and gives her an excuse that he has come answering a complaint. When Sharada tells him that she doesn’t know anything about a complaint, he blames it on her husband. Without wasting any more time, he asks her for a glass of water. Sharada, who suspects that she has seen the man somewhere goes to get some water. Vedanth uses this opportunity and enters her home. Upon spotting Sharada and Gautham’s wedding photo, he takes a quick video. After drinking the water he informs Sharada that he will soon return with the tools but smartly makes an escape. At home, Aarthi is irritated when Adithi does her facial at home. Parimala, who comes to give milk to Aarthi is caught by Adithi and Anjali forcing her to do a facial too. Parimala and three of her daughters have some fun time following that.

Meanwhile, Amulya and Vicky who are waiting for Vedanth get talking about the recent attack on her. By mistake, Vicky hints that something is going on with her and his brother. This causes Amulya to get highly annoyed so Vicky quickly retraces his words just as Vedanth arrives there. After some quarrel between him and Amulya, he shows them the video. At the Vashishta house, Suhasini scolds Paramananda for making useless plans and asks him to think of a way to reach Amulya a lesson for slapping her. He then thinks over it and suggests about stopping Aarthi’s wedding. At the meeting point, Vedanth is in disbelief to know that once again he wasn’t able to record any proof for them to see. Amulya gets very irritated to know that Vedanth has yet again called her for nothing.

As she is about to leave he holds her hand tightly to prevent her from doing, much to Vicky’s astonishment. She then gives him one last chance to prove himself following which he must stop pestering her. Elsewhere, Parimala vents out her thoughts to Manjunath about Aadya not being there for Aarthi. Just then Padma and Sarika arrive there. Upon asking for Sarthak and Aadya, Sarika interrupts Parimala and tells her that Suhasini had made it clear that her daughter will not be going to the house that was responsible for her miscarriage. Back at the location where Gautham’s house is, Vedanth rushes to catch the culprit but he escapes somehow. While Amulya’s saree gets stuck in the car door, Vicky runs behind his brother to stop him from doing anything. Vedanth then takes his brother to ‘Gautham’s house’ but it turns out his nemesis his quicker than him.

Upon seeing all new faces in the house, Vedanth is soon shocked. Angry he screams at the lady in the house stating that Gautham has paid money to them to tell lies. Luckily, Vicky stops him from doing something stupid. When they threaten to call the cops Vikranth somehow takes away his brother from there. By this time, Amulya’s dress comes off from the door and she goes to where the brothers are standing. When Vicky tells her that the evidence was fake, Amulya taunts Vedanth for believing in something that doesn’t exist.

How will Vedanth prove himself? Will Vicky and Amulya ever believe him? Stay tuned for the next update to find out.

Entertainment is just a click away, here on ZEE5.

Are You A Comedy-Buff? Are You A Jaggesh Fan? If The Answers To Both These Questions Is A Yes, Click Here To Watch Melkote Manja On ZEE5 Now!

Sriimurali To Vinaya Prasad: 5 UNSEEN Clips From Weekend With Ramesh That You Haven't Seen