Tonight, Vedanth valiantly defends Amulya and is successful in clearing her name in front of her parents. She later thanks him for all his help! 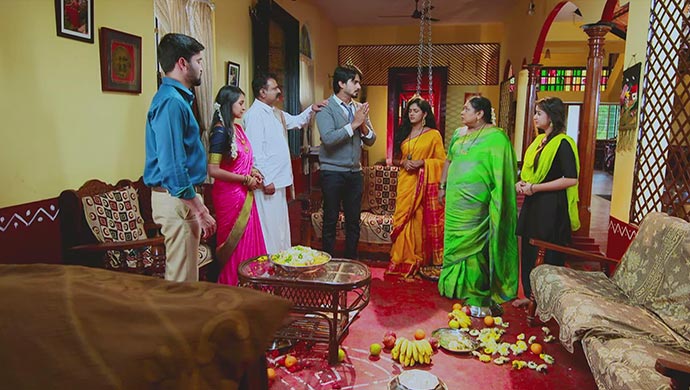 In the previous episode of Gattimela, the news channel on TV reveals a shocking video of when Amulya confesses that she was with Vedanth, on the night he was accused of sexual harassment. Tarini and Siddharth call off the wedding before insulting Amulya and her family. This leads to Pari beating up Amulya, even though she tries to clarify what exactly happened. On one hand, as Padma pressurises Sarika to confess the truth of how Vedanth went to jail, he finally intervenes and explains that Amulya is a girl with high values, thanks to her parents’ good upbringing.

On tonight’s episode, Vedanh continues to clarify to Manjunath and Parimala that Amulya has their values and she would never go to the trouble of ruining her trust with parents for any man. As he folds his hands pleading to Pari not to hit Amulya anymore as it is his fault, not hers, Manjunath steps in and tells him that he now knows the truth. He and Pari also feel guilty for doubting their daughter.

While all this is happening, Aadya gets a ray of hope knowing that deep down her brother has started liking Amulya because he hasn’t done anything like this for anyone apart from his family before. Meanwhile, Padma gets upset with Sarika and warns her to tell everyone the truth before she does. As she marches down, Sarika and she are stunned to see a puzzled Aarthi standing on the stairs looking at them.

Aadya and Sarthak soon catch up with Vedanth who is proceeding to leave the Manjunath house and ask him about how he is doing. To this Vedanth assures them that he is fine but they should go back in the house and see how Amulya is doing. Saying this as he is leaving he turns back to look at the empty doorway but doesn’t find Amulya there and goes towards his car when she surprisingly rushes to the door to see him.

He then senses her and turns back to find her in tears of gratitude bidding him farewell. At his house, Vicky gets the news just as Suhasini arrives there and tries to probe into what Sridhar said earlier about Vedanh being on his phone all the time. When she asks Vicky, he brushes her off telling her not to have such silly ideas in her head. In the night, Pari and Manjunath go to Ammu’s room and find her deep in thoughts and quiet much unlike her real personality.

They then go to her and the parents share some emotional moments with their daughter as they apologise for their behaviour when they should have actually had her back and told any outsiders that they know just who their daughter is. Vicky, in the meanwhile, goes to Vedanth gives him a tight hug. While the brothers are sharing an emotional moment, Vicky promises in his mind to ensure that he stands to support his big brother always.

Later, as everyone is sleeping, Amulya calls up Vedanth, who picks up the call after a while. Finally, when they speak, Amulya thanks him for his help and directly tells him about a possible feeling he might have started developing for her.

Will Vedanth accept this or fight it off like always? How long will it take for Vedanth to accept his feelings? Stay tuned and you will know shortly.

Watch the hit film, Premier Padmini, on your ZEE5 now.