Gattimela 8 May 2019 Written Update Of Full Episode: Vicky And Aarthi Sit At The Altar

Despite Aarthi's reluctance, Amulya, Adithi and Vicky convince her to sit at the wedding altar! She, however, gets on a big guilt trip! 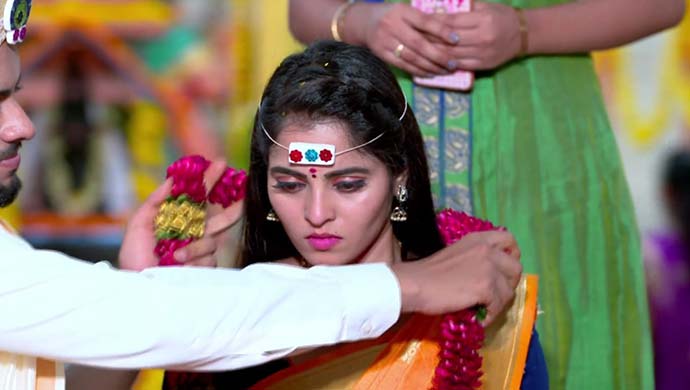 In the previous episode of Gattimela, Amulya is sad when she learns that her father’s loan was rejected and has second thoughts about her next step further. Elsewhere, when Vedanth informs Vicky about his wedding, he worries about what the family will think of him getting secretly married. The next day, Amulya and Adithi use excuses to dress up Aarthi and take her to the temple. Meanwhile, Vikranth is ecstatic about his dire wish being fulfilled at last. Later, Aarthi realises that they are not attending ‘a friend’s wedding‘ as Amulya said, and probes into the matter.

On tonight’s episode, When Amulya confesses that it isn’t Radhika’s marriage, Aarthi is taken aback. Vedanth quickly interrupts them and tells Aarthi the truth. She confirms the truth with Amulya and gets extremely upset about what is going on. Amulya is then reminded of the promise she had kept to Aarthi about convincing their parents first. Soon, the truth is revealed to the eldest Manjunath sister about why Amulya and Vedanth couldn’t go to either of the parents. Despite many attempts, an irate Aarthi proceeds to leave the temple with her sisters. Suddenly, an idea strikes Vicky who goes to the priest to discuss something. He soon brings Aarthi back and makes her stand in front of God. Then, he asks her to test God’s will by performing a small test, since she believes in the Almighty more than anyone else.

It is finally decided that even the Gods are with her on the decision to get married in secret, much to everyone’s relief. Vedanth, who doesn’t understand what just happened, clarifies with Vicky and is startled after knowing the truth. On the other hand, Parimala and Manjunath, who are at the temple too, are asked by the priest to bless a couple, who are getting married in secret. Meanwhile, at the altar, Vicky ushers Aarthi that she is taking the right step, as the priest recites the wedding chants. He soon asks the two of them to exchange their garlands.

As it turns out, Parimala and Manjunath find another couple getting married in secret and try to advise them against it. While he is asking them to rethink once again, Aarthi and Vicky exchanged garlands in the other temple. Much to Amulya and Vedanth’s relief, the two lovebirds are then asked to take blessings from God before they can proceed. The rituals then continue as usual. During this time, while Amulya is asking God to show her the right path, Vedanth wonders why the ‘bajaari‘ isn’t showing any signs of happiness even after achieving what they planned. Soon, the ‘taali‘ ceremony is about to begin when the priest asks who will replace their parents to do the ‘kanyadaana‘. Aarthi, who is extensively thinking about Parimala and all the dreams she had for her eldest daughter’s wedding, Vicky is asked to tie the taali.

Will Aarthi get cold feet? What will Amulya and Vedanth do? Stay tuned to find out.

Watch the ZEE5 Original Series Rangbaaz, if you like crime-dramas, streaming only on ZEE5.

To Know Which Two Puttanigalus Got Eliminated After Shubada On Sa Re Ga Ma Pa Lil Champs Season 16, Click Here.

Gattimela 9 May 2019 Preview: Will Aarthi Go Through With Her Secret Wedding?