On tonight's episode, Parimala's health deteriorates drastically while Vedanth successfully traces the house where Gautham and Sharada stay in! 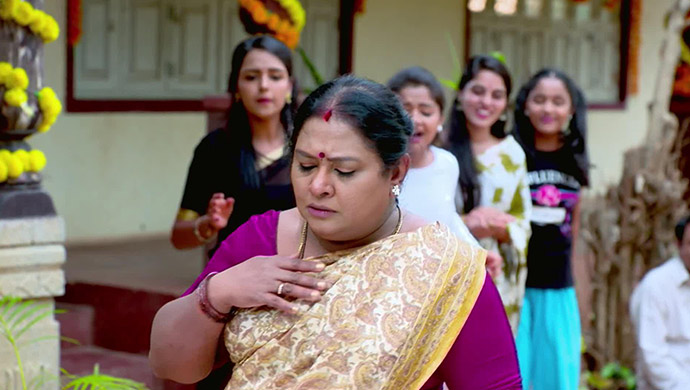 In the previous episode of Gattimela, Vedanth is successful in saving Amulya from the goons and later apologises for hitting her too. Without wasting another second she says sorry for hitting Suhasini, following which he then offers to take her home. Elsewhere, Aadya breaks up a heated argument between Sarthak and Suhasini about who was responsible for her miscarriage. The next day, the Manjunath sisters somehow convince Aarthi to agree to the marriage. In the Vashishta house, Vicky showers both Aadya and Vedanth with hugs and kisses when they give him the phone with Aarthi on the other line. Later, the Manjunaths are proud when Amulya gives her father her savings for Aarthi’s wedding.

On tonight’s episode, all the Manjunaths are proud of Amulya who contributes towards Aarthi’s wedding. Anjali suddenly breaks up the emotional moment and calls everyone outside urgently. Although they are tensed in the beginning they realise that Anju wants to play ‘Kunte-Bille’ one last time before Aarthi gets married. Since she is the youngest her wish is fulfilled and everyone including Manjunath and Parimala joins in on the game. After Manjunath’s turn when Parimala starts playing, she feels quite light-headed and her chest becomes heavy. Somehow she finishes the round and excuses herself. While Amulya’s concentration is on the game, some part in her isn’t convinced that Parimala is okay.

Elsewhere, Vedanth, Vikranth and Sarthak talk about how the first two are going to get entry into the Manjunath house after the Suhasini-Parimala incident. They soon come up with a plan that will ensure their nosy uncle Paramananda, as well as Suhasini, don’t come in the way. At the Manjunath house, Amulya follows her mother into the kitchen and probes about her health. Parimala, who doesn’t want to bother her, makes an excuse and gives her an errand to run for Aarthi’s marriage. She then goes to the hospital and is shocked when the doctor says what she experienced was nothing but a mild heart attack. When questioned if she had a troublesome few days in the past, Parimala remembers Suhasini’s slap but chooses not to tell the doctor. She also vents out her desperation that she has three more daughters to get married.

Meanwhile, as Gautham steps out of a cake shop and spots Sharada at a distance, he smirks to himself. In a soliloquy soon after, he wonders what a coincidence it is that both his wedding to Aarthi and his wedding anniversary with Sharada are on the same day. He then tells himself that today is the day that he somehow has to get rid of Sharada permanently. He doesn’t notice that Vedanth’s car standing right behind, in his excitement. Vedanth, who captures all of this on a video, promises to show this proof when the time is right and uncover Gautham’s true face. Saying this he follows Gautham in his car. As the Manjunath sisters are selecting their dresses Anju and Adithi get into a quarrel causing Aarthi to intervene.

Soon, Parimala comes there and calls Amulya to have a chat. Vedanth, on the other hand finally locates Gautham’s house and calls Vicky. He asks him to bring Amulya along and come to the location he sent as soon as possible. After Parimala takes Amulya to the kitchen she makes the latter promise that should anything happen to her, she should take the responsibility of the household. Amulya, however, promises her mother that she won’t let anything happen to anyone.

Is Parimala alright? Will Vedanth be successful in proving himself? Stay tuned to the next episode to find out.

If You Are A Fan Of The Cute Vihan Gowda, Watch His Film Panchatantra, Right Here On The ZEE5 Platform

Here’s What Preethu Must Do To Marry Janani, The Love Of His Life, In Paaru