In this episode, Amulya gives Vedanth a chance to prove that Gautham is a fraud. With some external help, he gets a different address of Gautham! 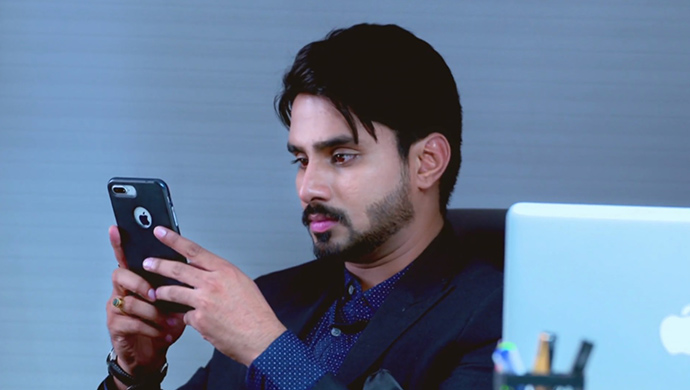 In the previous episode of Gattimela, Amulya pleads to Vedanth to apologise to Gautham but all her efforts go down the drain. Soon, Vedanth decides to try and put sense into Aarthi and calls her to the park to meet, but things go horribly wrong. Firstly, she says that she already knows he is about to bad-mouth Gautham. Second, she denies believing a word of what Vedanth is telling her. When he is about to leave from there, Vedanth gets a mocking note from Gautham but is surprised to see him with Amulya.

On tonight’s episode, Gautham mocks Vedanth for offering him money and throws a nasty taunt his way for forgetting his challenge so easily. When Vedanth asks him to name his price, he pretends to think and informs him that there is nothing he wants in particular. Gautham then tells Vedanth that in a way they are both the same because they both go after what they want. Upon finding out that Gautham is obsessed with Aarthi and will go to any lengths to get her, Vedanth gets furious. After throwing a few more comments his way about how he can’t do anything, Gautham bids Vedanth farewell and rides away on his motorbike.

At night, Vedanth paces up and down thinking how to manage his business and this problem, Amulya calls him up, much to his annoyance. The minute he answers the phone, without any small talk Amulya directly gets to the point and tells him that she is ready to listen. Shocked, he looks at his phone to check if it is Amulya only calling. She then clarifies that she even though her brain is blaming him for ruining everything around him, her heart says that he is not the kind of person who will simply accuse someone. Vedanth is honest with her and informs her that he is still in disbelief that she is ready to listen. She then gives her reasoning and makes Vedanth listen to all of it before putting up her condition. She gives him 24 hours to prove that Gautham is a fraud and prevent Aarthi from getting married to him.

Much to her surprise, Vedanth responds in a positive manner and promises to prove himself. This puts Amulya in a dilemma about why someone like Vedanth would always have something to argue is actually agreeing with her. The next day, Sarika is impressed when she meets Gautham and learns about everything that he did. However, she warns him against Vedanth and asks him to be careful. To her surprise, Gautham tells her that he wouldn’t have taken such a risk without doing a thorough background check. At the office, Vedanth recollects the condition put by Amulya and starts brainstorming on a plan. Meanwhile, Gautham tells Sarika about his complete plan along with a small twist he has put, just in case something goes wrong. Sarika is thrilled to hear it and congratulates him.

Kantha, without knowing Vedanth’s mood, enters his cabin and irritates him. He is soon asked to get out by Vedanth, who realises a few moments later that the example Kantha gave of a man who married two women and got caught by the cops, suits perfectly in Gautham’s situation. Suddenly, an idea strikes him, thanks to his assistant. At the Manjunath house, Amulya quickly eats her breakfast even though her father asks her to have her food slowly. Before long, she runs out of the house to get to work. Parimala soon returns home and gives good news to her husband about having arranged for the money for Aarthi’s wedding. Anjali, on the other hand, finds a message from Vicky on Aarthi’s phone asking her to come to the temple. When her eldest sister takes permission from Parimala to go to the temple, Anjali’s doubts are confirmed.

Meanwhile, at the office, Vedanth hires a private detective agency to find out about Gautham by giving them his basic details. Asking for every single detail Vedanth orders them to fish out information on his nemesis fast. After a while, Vedanth gets an address of Gautham and immediately realises that it is not the one he currently stays in. Relieved, he asks Kantha to call Amulya into his cabin. Later, he gives out all the information he found out causing Amulya to coldly tells him that they can follow this lead also but whether the results are fruitful or not only time will tell.

Who stays in the second address that Gautham has? How will Vedanth and Amulya learn the truth? Stay tuned for the Monday update to find out.

A Pioneer Of Parallel Cinema, TS Nagabharana Is The Second Guest On Weekend With Ramesh 4

Gattimela 10 June 2019 Preview: Amulya Worries That Vedanth Might Be Right About Gautham