On tonight's episode, while Sarika and Suhasini discuss the real plan of action about the Ganesh Chaturthi, Amulya does the unthinkable! 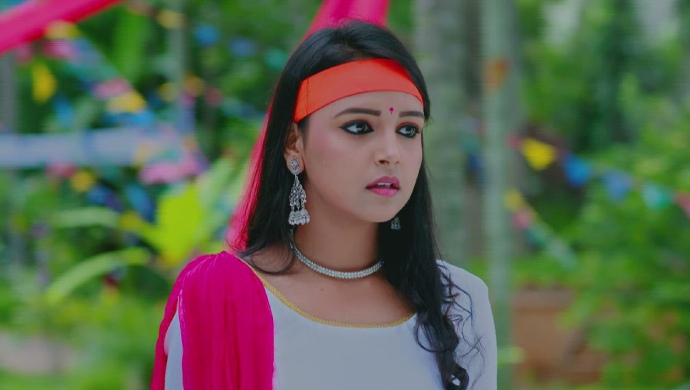 In the previous episode of Gattimela, Adithi and Amulya manage to convince their parents that the latter was at home only the past night. At the office later, Kantha makes attempts to tease Amulya and Vedanth when she walks into the cabin but he leaves as soon as he senses his boss’s irritation. She then goes to Vedanth to find out if the news about last night hasn’t been spread to anyone else. A few moments later, they both dash into each other’s head but Vedanth disagrees to hit Amulya on the head again, despite her informing him that horns will grow if they don’t. Later, Suhasini expresses annoyance to Sridhar when she learns that the Manjunaths have come for the pooja in an auto.

On tonight’s episode, the Ganesha pooja begins with full pomp and splendour and Vicky tries to get romantic with Aarthi by throwing petals on her. Meanwhile, Parimala praises Suhasini’s preparations for the pooja just as an annoyed Sarika arrives there. While Vicky tries to have fun with Vedanth by throwing petals at him, the latter assumes that Amulya is throwing them at him and feels disgusted about it.

After everyone seeks the blessings from Lord Ganesha, Sarika indicates Suhasini to come to a side and questions her about what is going on. An irritated Suhasini reminds her that she is not supposed to behave so secretively in public before telling her what he real intentions for the pooja are. Finally, Sarika is happy to know that Parimala and her family have been called only to be insulted. After sometime Vicky goes to call the three Manjunath sisters to speak to them about something and asks Aarthi to stay with her mother, much to her surprise.

Soon afterwards, Suhasini and Sarika watch as the former’s friends speak to Parimala. When they tell Pari that Suhasini has announced that it is Sarika who is getting married to Vicky, she and Aarthi are shocked. Further, when the ladies insult the lower-class girl Vicky initially fell in love with, Suhasini and Sarika smile while Pari and Aarthi figure out that the ladies are talking about the latter.

Elsewhere, after a lot of discussions, Amulya gives Vicky a solution to his problem; Suhasini agreeing to get him married if Vedanth agrees to get married. What they don’t realise is that Sarika, who is just a little distance away from them hears everything. Amulya continues to tell her sisters and Vicky that she will make sure she convinces Vedanth by or by crook to agree to get married. Saying this, she narrates the whole plan. Meanwhile, Pari asks Aarthi to give the gift that she has made for Suhasini.

Despite all the love Aarthi shows for Suhasini, the latter doesn’t show any interest in the flower garland her soon-to-be daughter-in-law made. In fact, a few of her friends overhear Aarthi calling herself the bride and rebuke Suhasini for being a hypocrite in terms of accepting a lower-class daughter-in-law Like Aarthi. While Pari and Aarthi stand with a heavy heart, Amulya, on the other hand, curses her younger sisters while walking to the main area.

She doesn’t notice Vedanth in her way and vice versa. They have a romantic moment when he saves her as she is about to fall and in a reflex pulls her close to him. The moment is short-lives when Vedanth realises that her hand in on his shoulder. Even though he gravely scolds her, his jaw drops when she apologises claiming it to be her mistake.

What is Amulya’s plan for Vedanth? How is Sarika going endure Vicky and Aarthi are separated? Stay tuned to Monday’s episode to find out.

Ever Heard About A Relationship Between A Woman And A Tomato? Bookmark The ZEE5 Original Movie Tamashree For This Weekend If Your Answer Is No, Streaming Here In Kannada