I’m tonight's episode, Suhasini makes her family happy. Vedanth, however, realises that Ammu is not entirely happy and tries to ask her but fails! 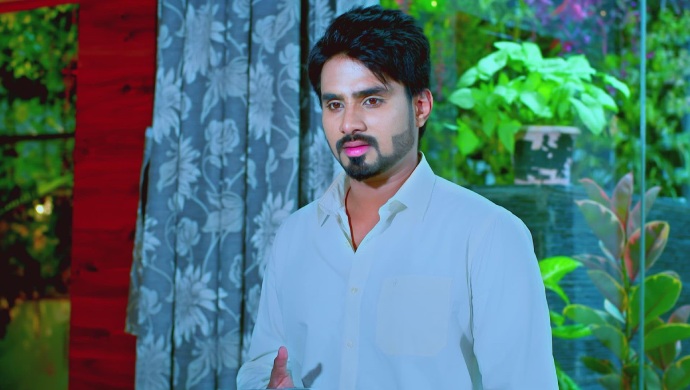 In the last episode of Gattimela, Vedanth apologises to Suhasini for lying to her before and the mother-son share some bonding time over dinner. The next day, Pari overhears Aarthi saying that if the condition is that her mother falls to Suhasini’s feet she would rather not get married and is heartbroken. She then goes to Suhasini’s house to apologise. Vicky calls Amulya over immediately after learning what Parimala is about to do. In the end, when Amulya touches Suhasini’s feet instead of her mother, Vedanth doesn’t like it and takes her by the hand to lift her.

On tonight’s episode, Vedanth cannot bear seeing Amulya at Suhasini’s feet and goes up to her to pick her up by the hand. After a few moments when Amulya informs him that the way he has held her is hurting, he immediately let’s go of her arm. Then he gets straight to the point and informs his mother to stop all this and confirm whether she has accepted Vicky and Aarthi or not. After some coaxing from Sridhar, Suhasini takes her time and finally accepts the relationship. Vedanth then sends Parimala and Amulya back home by giving the car to his driver. Vicky is ecstatic and showers Vedanth with hugs and kisses in front of his parents for making his dream come true.

Elsewhere, as Manjunath returns from work, Aarthi informs him that Amulya and Pari have been gone all day and aren’t responding to her calls. Just as they are wondering where the two might have gone, Parimala returns home with Amulya and Anju and Adithi, whom they found on the way. Upon spotting a box of sweets in their hand, Manjunath asks Pari what’s the matter. He and Aarthi are soon puzzled to learn that Suhasini, without creating an issue okayed her and Vicky’s wedding. With some difficulty, they succeed in convincing the rest of the family that there is indeed a wedding that will take place soon. A short while later, Vedanth gets worried for Amulya when she doesn’t receive his call.

Ammu, on the other hand, is lost in deep thought and doesn’t bother picking up the phone. Finally, when Anju comes to inform her that her phone is ringing, Amulya picks up the phone and replies wryly that she is thinking about what happened earlier. Vedanth, who is surprised at this side of Amulya (the quiet side) tries to understand why she is upset but fails to know the truth. Frustration sets in soon and Vedanth decides to contact Sarthak to understand what’s going on. Amulya gets a call sometime later in the day from Sarthak, who asks her to come to their regular meeting spot right. She tries to understand what’s going on but Sarthak asks her to hurry up and come get to the place first.

Vedanth arrives at the spot just as Amulya is asking Sarthak if the former is okay. Vedanth then does the unthinkable and cheers up Amulya in an unusual way. Unable to bear her silence, he scolds her to the point that she explodes and becomes her ‘rowdy self’ again. Sarthak is left alone in the end as Vedanth storms off shortly after Amulya disperses from the meeting. At night, Parimala prays to the Gods in her pooja room to ensure that what happened earlier in the morning remains a secret and that everything in Aarthi’s life goes smoothly. Ammu joins her soon and the ladies have a heart-warming moment.

Has Vedanth started liking Amulya? What is Suhasini’s real plan? Stay tuned for tomorrow’s update to find out.

Chandan Kumar And Aishwarya Arjun Have Floored Us With Their Chemistry In The Hit Film Prema Baraha. Click Here To Watch This Film Once Again On The ZEE5 Platform