Gattimela 5 June 2019 Written Update Of Full Episode: Gautham Is One Step Ahead Of Vedanth

In this episode, Amulya gets the shocking news of Vikranth's disappearance and pacifies a worried Vedanth. Elsewhere, Manjunath finds a bruised Vicky! 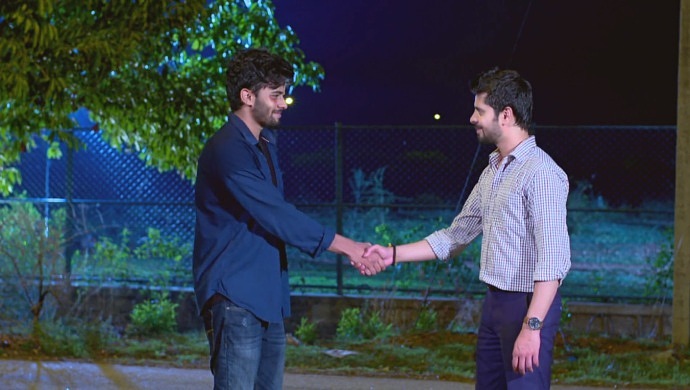 In the previous episode of Gattimela, Gautham is saved as Amulya reaches Vedanth’s cabin after he confesses his evil intentions. This gives Gautham the opportunity to create problems between Vedanth and Amulya. Elsewhere, the priest tells Suhasini that the woman Vicky loves might be the cause of his death and is dumbfounded. When she enforces her will on Vikranth, he gets enraged and storms out of the house promising never to return. Vedanth is shocked to learn about this from his mother later.

On tonight’s episode of Gattimela, while Vikranth’s path is blocked by some goons, Amulya and Aarthi discuss the whole ‘insult to Gautham by Vedanth’ incident in-depth. Amulya convinces her sister to calm down and not call up Vikranth. Then, both of their focus shifts to an angry Gautham. Meanwhile, Vikranth learns that the goons are petty thieves when they start demanding for anything expensive he has. When he tries to resist them, a big fight ensues between Vikranth and the thugs. Gautham, who arrives there gets tensed and rushes to pick up a fat stick.

Elsewhere, Vedanth, who is in his car looking for his younger brother, remembers his suicide attempt and gets worried. At the Manjunath house, just as Adithi and Amulya are about to discuss the serious situation at hand, the former gets a call from Vedanth. As soon as she picks up the call, he directly gets to the point and asks her whether Vikranth came near her house to meet Aarthi or something. Irritated, she tries to teach him a lesson on mobile phone etiquette. He interrupts her and asks Amulya to first listen before talking. She is soon shocked to learn that Vikranth has left his home. As it turns out, Amulya actually pacifies Vedanth by asking him not to be scared and hoping that he finds Vikranth soon.

As Manjunath is returning home, he spots Vikranth in a bad condition and probes into the matter. Vicky, who curses his luck that his ‘to-be father-in-law’ saw him in this condition, and tries to avoid any serious questions. Manjunath coaxes Vicky to confide in him about any problem he can help him with. Just as Vicky is about to reveal his feelings, Vedanth arrives there and their conversation is left mid-way. Back at home, Amulya worries about how to tell Aarthi that Vicky is missing. When she is about to tell Aarthi, she receives a message from Vedanth that Vicky has been found and heaves a sigh of relief. Then, she somehow convinces Aarthi that she was talking about a fight of her and Vedanth’s, despite the latter doubting her.

Meanwhile, Vikranth quietly sits in the car after which Vedanth asks the driver to give them a minute. He then starts scolding his younger brother for making such poor decisions in life. He also gets worried after looking at Vicky’s bruises and asks what happened. The minute Vicky utters Aarthi’s name from his mouth Vedanth informs his brother about Gautham’s foul plan. Surprisingly, Vikranth doesn’t buy it and instead tells him what happened with the goons. In his flashback, Gautham is seen saving him from the goons after picking up the stick. After Vikranth thanks him, Gautham takes this opportunity and tells him the same sob story he gave to Amulya about Vedanth harassing him. However, Vikranth believes everything Gautham said and questions Vedanth as to why he thinks so wrong of him. A worried Vedanth then recollects everything that Gautham actually told him in his cabin.

What will Vedanth do now? Will Amulya believe him? Stay tuned to Gattimela to find out.

Watch your favourite shows of Zee Kannada on the ZEE5 platform.

Melkote Manja Will Keep Your Amused And Occupied Thanks To Namma Navarasa Nayaka Jaggesh. Click Here To Watch This Film On Your ZEE5

Gattimela 6 June 2019 Preview: Vedanth Fails In Convincing Vicky That Gautham Is A Fraud