On tonight's episode, Amulya and Vedanth are devastated when the video clip of her confessing that she spent a night with Vedanth surfaces on the news 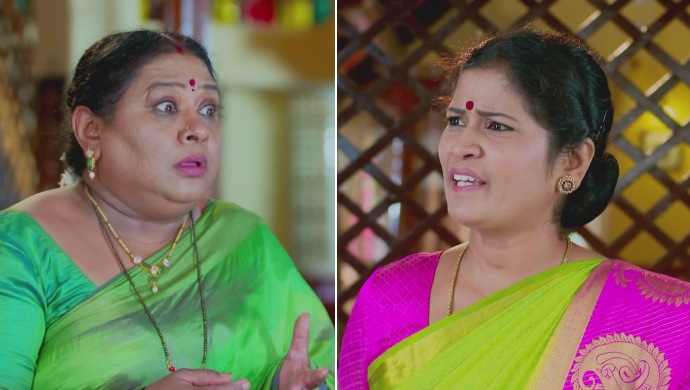 In the previous episode of Gattimela, Vedanth is forced by Adithi and Sarthak to come inside the house, when they find him standing outside. Siddharth gets irritated to see Vedanth but somehow masks his feelings. Soon, Pari asks Aadya to bring Amulya down. However, Amulya tries to be a good girl and keeps her gaze to the floor and so she misunderstands Vedanth for Siddharth. She is soon stunned to see Vedanth and drops the coffee on his lap. In the end, Vedanth curses himself for trying to stop her wedding while Amulya and Siddharth are sent to the terrace to speak in private.

On tonight’s episode, Siddharth asks Amulya if she likes him and instead of answering directly, she takes the longer and explains everything like no one is perfect is life so we should give everyone a chance. When he brings her back to the topic of if she likes him or not, Amulya tells him that if her parents have liked him for her, she is happy with their decision and accepts him.

Meanwhile, Vedanth comes out of the bathroom and gets irritated looking at Amulya and Siddharth on the terrace and goes to her room. There as he contemplates why he is so bothered about her getting married, Amulya and Siddharth who plan to go down since they have been up for a while, start laughing at some meme on his phone. Annoyed by their laughter, Vedanth beaks a bottle of talcum powder on the floor, causing Ammu to hear the noise.

Sending Siddharth down, Amulya goes to the check in the room and is startled at Vedanth’s behaviour. She then looks at his pant that is wet because of the coffee and starts laughing. When she doesn’t listen to him and continues laughing there is a chasing scene where Amulya screams at him for forgetting who he is. She continues to throw things at him and asks him to stay out of her life and now she is engaged to another man, whom her parents have liked for her.

As she tries to leave the room saying this, thanks to the powder she slips and falls right into Vedanth’s arms. For the next several minutes, they both stare into each other’s eyes as one of the cloths that they throw lands correctly on top of them. They don’t move until Parimala shouts out to Ammu to come down soon. Upon realising in what position they are, Amulya pleads to Vedanth not to drop her as she has to look presentable for the people downstairs, but he does exactly that.

Annoyed, she scolds him and they both have a heated argument before she rushes down. Then, Manjunath begins to proceed with the proposal and asks Siddharth if he is okay to go ahead with the wedding. Upon learning that it is a yes from him everyone is happy and Amulya is asked about her opinion. As soon as she says that whatever her parents like she will do so accordingly, Vedanta comes there and goes to stand in a corner, extremely irritated.

By this time, Tarini assures the Manjunaths that they don’t have to worry about the expenses or take any other tension as she will take care of it. She also adds that she would like Aarthi and Amulya to get married on the same day, much to Pari and Manjunath’s delight. This is where things make a horrible twist. As Manjunath asks Sarthak to switch on the fan, unknowingly he switches on the TV and the news shows a clip of Amulya taken secretly at the police station earlier.

In it, she is seen confessing that she and Vedanta spent a night together. While Pari cannot believe what just happened, Tarini rebukes the Manjunath family for having such a cheap character. Amulya and Vedanth are shocked and guilty in the end.

Will Amulya be forgiven? Does Vedanth plan to have Ammu’s back? Stay tuned to Monday’s episode to find out.

Watch all the episodes of the blockbuster chat show of Karnataka, Weekend With Ramesh Season 4, streaming for FREE on your ZEE5.

For A Unique Family-Drama Of A Parsi Family, Watch The ZEE5 Original Series Akoori, Now Streaming In Kannada