As it is their first night together, Vikranth gifts Aarthi something new for her to wear. 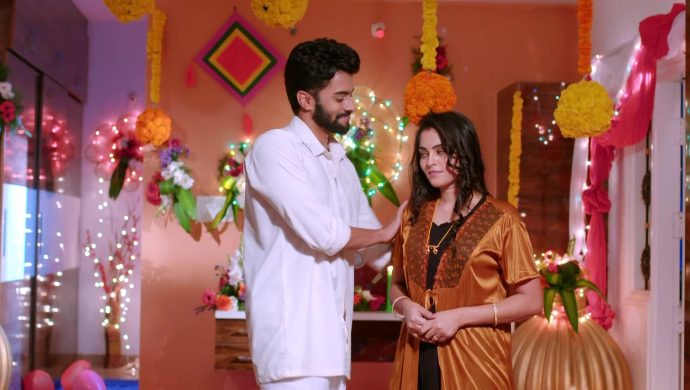 In the previous episode of Gattimela, Vedanth praises Adya and Amulya for making preparations for Vikranth and Aarthi’s first night together. Sarthak also gets excited about all the arrangements that have been made. At home, Pushpa is worried about the financial state of that house and her catering business. Druva overhears this and decides to help them in some way possible as they have helped him and fed him during his time of need.

In this episode, Aarthi and Vikranth are sharing a romantic moment as it is their first night together. Vikranth just takes her name and feels like everything that has happened is a dream. He tells her that he cannot believe that he is finally married to her. He gives her a gift and tells her to wear it as he will be waiting for her. Aarthi goes to change her clothes.

Elsewhere, Vedanth accidentally tells Adya and Sarthak that he cannot imagine the pranks they all will be playing on the first night after his marriage. Everyone begins to smile in disbelief that Vedanth even had the thought of having a first night. Sarthak asks Adya if the two should go back to their bedroom when she says that she is waiting for Vikranth to shout as she has set a trap for him. The four of them decide to play a game of truth or dare.

At home, Pari accidentally calls everyone including Aarthi for dinner. When she realises that Aarthi is now married, she begins to tell Manju that someday their other three daughters will also get married off and they will eventually be lonely. They all share a sentimental moment.

Later that night, Adya, Sarthak, Amulya, and Vedanth begin to play a game of truth and dare. When Amulya spins the bottle, she is required to give Vedanth a dare or ask him for a truth depending on what he chooses. When he chooses dare, Amulya wonders if she should ask him to propose to her. However, she tells Adya that she does not know what to ask him. Vedanth, calling her Amu, tells her not to worry as he will do anything she asks him to do. She thinks again if she should ask him to propose to her so that she can say yes immediately.