In the next episode, Vedanth explains to Vicky-Aarthi why getting engaged right here right now is important. Also, Suhasini has a surprise for Sarika! 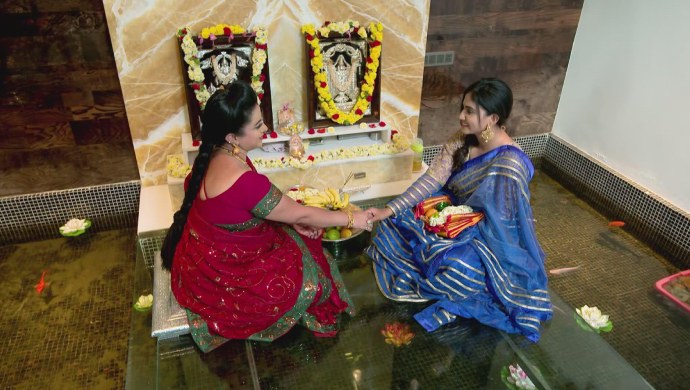 In the previous episode of Gattimela, Vicky thanks Vedanth for showing him a big lesson on positivity and taking control on one’s life via the story of the legend, the Karate King Shankar Nag. Then, Vedanth takes them to an old couple’s house to teach Aarthi a lesson on how blind faith in something can lead to pain for oneself. While Aarthi and Vicky make up for the past few incidents, Amulya gets ready to go find Vedanth and give him a piece of her mind for kidnapping Aarthi.

In the next episode, Vedanth continues explaining to Aarthi and Vicky that only he knows the pains and obstacles that he has to take to ensure that neither of the families egos is hurt in this marriage. He also warns them that if things go on like this, no one knows what may happen in the future. Elsewhere, Suhasini gives Sarika a plate full of auspicious things and remembers the time when Sridhar’s mother called her home to give it to her. Then, with a smile, she then accepts Sarika into her family as her daughter-in-law.

How is Vicky going to react to this? What will Vedanth’s defence plan be? We’ll find out shortly stay tuned.

Put On A Few Kilos This Deepavali 2019? These 4 Health Drinks Will Help You Detox