Adya and Amulya ask Vedanth and Sarthak to help them in decorating Vikranth's room before his first night with Aarthi. 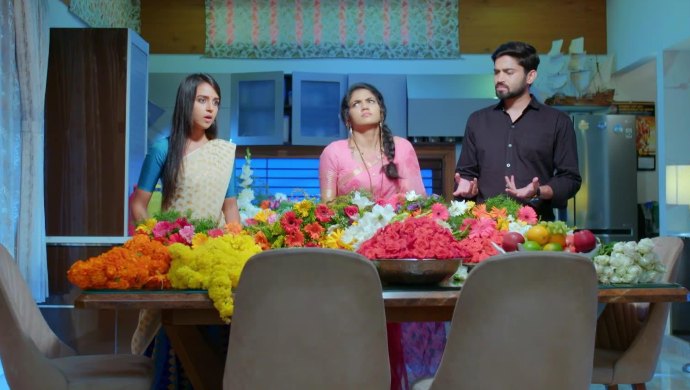 In the previous episode of Gattimela, Vedanth begins to ask Amulya about her confession to him. However, before she can say anything, Amulya tells him that they have reached the flower market and gets down from the car. Vedanth realises that she is trying to avoid the conversation and gets irritated with her. At home, Adya and Aarthi are having a conversation about Sarika who has been sent to a relative’s house in another country.

In this episode, Vedanth praises Adya and Amulya for the two are taking care of preparations for Vikranth and Aarthi’s first night together. Sarthak also gets excited about all the arrangements that have been made. Amulya, meanwhile, tells Vedanth that they were waiting for him to come so that they can all make the arrangements. Vedanth says that they could have called the decorators to make all these arrangements. Amulya tells him that he might be ‘the great Vedanth Vasishta’ to society but in that house, he is the brother of the newly married Vikranth and so he must take ownership and make all the arrangements. Adya tells Sarthak to learn something from what Amulya is saying and tells him to bring the flowers to the room.

At home, Pushpa is worried about the financial state of that house and her catering business. Druva overhears this and decides to help them in some way possible as they have helped him and fed him during his time of need. Vedanth, Sarthak, and Vikranth share a light moment when they make fun of each other. Ajji and Suhasini too come to the room as Vikranth gets ready for his first night with Aarthi and wishes them for the future. Before he can go into the room, Adya and Amulya ask him for Rs. 10,000 as a price to enter his room. Vedanth playfully tells him to sleep with him in his room and tells him that there is no need to pay them the money. Vikranth gives them the money anyway. Adya, before he can enter, tells him that he will only be allowed to go into the room if Vedanth praises Amulya. Vedanth then calls her beautiful inside out.