In this episode, Manjunath turns a deaf ear to all of his daughters' pleas to get him to forgive them. Also, Vicky feels guilty for what happened! 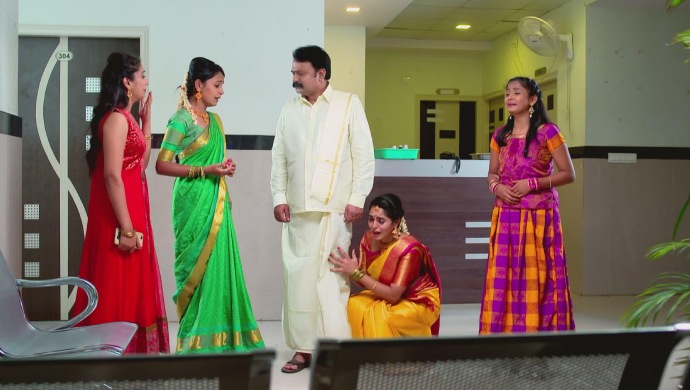 In the previous episode of Gattimela, Gautham true face is revealed in front of everyone because of Aditya and Parvathi’s help. Dumbfounded, Manjunath and Parimala are still coping from one shock when Gautham reveals to everyone about Aarthi and Vicky’s secret-romance. Next, Manjunath and his wife get the shocker that Amulya and Vedanth knew about their’s siblings and kept everything hidden. In the final bombing news, Suhasini insults Parimala to an extent that she gets a major heart-attack collapsing immediately on the ground. After admitting her to the hospital, Manjunath slaps Vicky causing Vedanth to take him away from there.

On tonight’s episode, Manjunath stands dumbfounded when the doctor informs him that Parimala has already suffered a mild heart attack previously. She then asks Manjunath to wait outside while Parimala is taking rest. With a heavy heart when Manjunath leaves the room Aarthi is the first one to speak but not for long. Her father despises Aarthi for being the reason for Parimala’s condition when Amulya intervenes, He snaps at her too for hiding such an important thing from him when he had thought of her as his son. All the four sisters plead to him for forgiveness but he doesn’t agree and gets angrier. To their horror, he completely disowns them and asks them to get out of his sight before he does something horribly wrong.

When Amulya and Aarthi plead to him to at least let them see their mother, he loudly warns them that unless they want to see his dead body they will leave immediately. No matter what all they try Manjunath is adamant on his decision to not let them meet Parimala. Sarika, who is standing in a corner, enjoys watching the Manjunath sisters suffer and is happy that there is less scope for Vicky and Aarthi’s wedding. Just then the doctor comes out of the room saying that the Parimala has regained consciousness. Relieved the girls try to enter the room but are stopped by Manjunath, who screams at them to leave the premises at once.

Elsewhere, as Vedanth and Vicky are returning home, the former gets a call from Sarthak and stops the car in the side to speak to him. By the time Vedanth finishes the call with Sarthak to find out what is happening, Vicky gets out of the car too. When he hears that Parimala is better now, he becomes emotional in front of Vedanth and expresses his guilt for causing all this mess. He continues to tell Vedanth that had he listened to him about Gautham all this wouldn’t have happened in the first place. Vedanth consoles him and asks him to first worry about how to deal with Suhasini. As they are walking home, people start heckling the Manjunath sisters on the road.

Aarthi tells Amulya not to react to their comments. Soon, they reach their house and stand sadly in the front yard looking at all the wedding decorations. A worried Anjali starts asking questions about whether they’ll be thrown out of the house but Amulya assures her that no such thing will happen. After a while of conversing, they sit down in tears at the footsteps of their locked house. Back at the hospital, as soon as Parimala regains consciousness Manjunath expresses his relief and asks her why she didn’t tell him about the mild heart-attack earlier. To this, she apologises and promises not to do such a thing ever again. In the end, she asks for her children causing Manjunath to get upset.

How will Parimala react after she finds out they aren’t at the hospital? Stay tuned to tomorrow’s update to find out.

Watch Thayige Thakka Maga, if family-drama films are your favourite, streaming in HD on ZEE5.

Watch Beautiful Manasugalu This Monsoon If You Are A Die-Hard Romantic-Thrillers First Hand, Streaming Here On Your ZEE5

They Are The Biggest Examples Of Humility: Ramesh Aravind On Sudha And Narayana Murthy