On tonight's episode, many situations bring Amulya and Vedanth together, much to their dislike. The evening then ends with a huge fight between them! 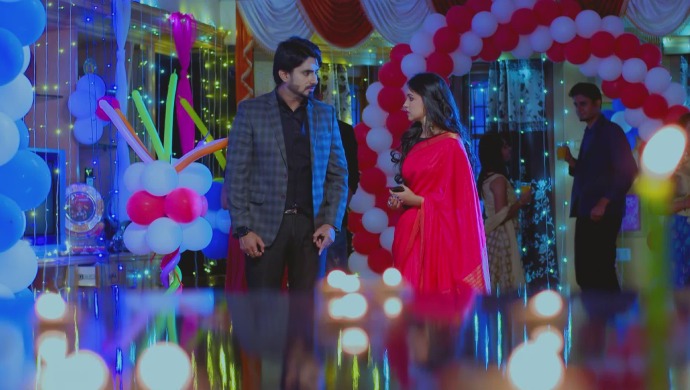 In the previous episode of Gattimela, Vedanth, with much difficulty, tries to look away from Amulya and surprisingly opens the car door for her. Vicky, on the other hand, struggles to ask permission from Manjunath and pretends to faint in front of him. At the party location, Amulya is about to fall after getting out of the car but Vedanth saves her causing them to share a romantic moment. When the actress who was supposed to endorse Aadya Organics questions Vedanth about the bad publicity and if he has a girlfriend, Amulya’s reflex kicks in and she announces that she and Vedanth are dating.

On tonight’s episode, after the cake-cutting, Namrata informs the waiter to let Amulya and Vedanth eat from the same plate just to check if they are really dating or just acting. Soon, she goes off causing them to get upset with each other and move a little distance away. Vedanth soon realises that Amulya is staring at him and wonders what’s wrong. Amulya, on the other hand, quietly goes and gets a tissue paper and is about to rub a bit of cake from his face which scares him.

She immediately asks him to keep quiet and wipes of the cake from his face, much to his surprise and realisation that she is not trying to pounce on him. Soon, Amulya asks him why they are standing away from the crowd. Stating that he hates crowds or public gatherings when Vedanth looks away, she scolds him under her breath. Elsewhere, Vicky has a hard trying to get Aarthi to stop laughing about the fact that he was so scared to speak to Manjunath.

When he asks her which fine dining restaurant she wants to go to, Aarthi points him to the roadside food stall and asks him to hold her hand and accompany. Delighted with what Aarthi just said, Vicky doesn’t wait two seconds before holding her hand and taking her to her desired destination. During this time, poor Kantha struggles to walk back to the city seeing that there are no autos around too.

Back at the party, just as Amulya is scolding him in her mind, the waiter comes with juice and she takes a glass. Suddenly, she keeps the glass that Vedanth took and takes an extra straw. Puzzled, when he looks at her, she signals him that Namrata is watching them from a distance away. Hesitantly, Vedanth is forced to drink from the same glass as Amulya. In soliloquy, he curses himself for having ever taken up celibacy.

While Aarthi and Vicky share a delicious plate of Gobi Manchuri from the roadside stall, the deal at the party is officially announced as positive and Amulya and Vedanth are felicitated. When his friend’s wife puts a garland on both of them together, they feel very awkward. However, when his friend mentions that he hopes that the two should get married soon, Vedanth excuses himself politely and leaves the venue without another word.

Amulya too defends him and tells everyone that he had an important meeting so they have to leave. At the parking Vedanth screams at Amulya for the lies, she said inside and asks her not to open her mouth their journey back home. She tries to retaliate but fails in front of Vedanth’s anger. On their way, a group of villagers block their path much to Amulya and Vedanth’s astonishment.

What are these people here for? What will happen now? Find out from Monday’s episode.

Watch Duniya Vijay’s Johnny Johnny Yes Papa, for your entertainment this weekend, only on ZEE5.

Watch Pushpaka Vimana If You Are Looking For A Refreshing Change In The Film-Routine You Have, Streaming In HD, Here On The ZEE5 Platform

I'm A Person Who Loves Surprises In Life: Ashika Rangnath On Her Future-Plans: EXCLUSIVE