On tonight's episode, Vedanth somehow lands up in Amulya's house, much to her astonishment. Amulya and Siddharth later have a one-on-one conversation! 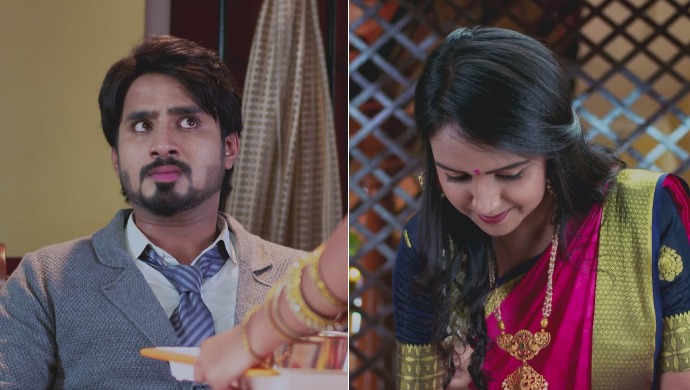 In the previous episode of Gattimela, when Amulya doesn’t listen to Vedanth about not marrying, he orders her to come early to the office the next day. However, when he learns that she will not be coming as a prospective groom is coming to the Manjunath house, Vedanth is upset and takes the day off to go to Amulya’s house. Once there, Vedanth comes face-to-face with Siddharth, the soon-to-be groom, but misguides him to the Manjunath house, in an attempt to prevent the wedding.

On tonight’s episode, when Anju tells Aarthi that Vedanth is standing outside their house and suspects him to have come only to stop the wedding. Aarthi dismisses her doubts placing her full faith in their Vedanth Bhaava. Meanwhile, Pari asks Manjunath to check why the groom’s side family haven’t yet come home yet.

Outside their house, Vedanth curses Amulya for not even informing him that she planning to get married and curses her and Siddharth. Just then, much to his astonishment, Adithi comes there and asks why he is outside their house. As they are discussing, Adithi invites him inside but he hesitates. That’s when Sarthak arrives there and informs him what a pain it was to find Siddharth and his family.

As he is entering the house, Siddharth looks angrily at Vedanth, who tries to avoid eye-contact with him. At home, Suhasini gets a shocker when Sridhar comes there and informs her that he is sure Vedanth will agree to marry soon. When she asks him to clarify what he is saying, Sridhar enunciates that if Vedanth is not at the office or at home or with friends, it means that he is with a girl.

At the Manjunath house, Siddharth stares as Vedanth with fire-eyes and curses him in his mind. Unfortunately for Vedanth, Manjunath picks up the topic of why they were late and Tarini clarifies. He then watches Manjunath and Sarthak curse the man who misguided Siddharth. When Pari asks Aadya to bring Amulya down, she wonders why Ammu and her brother aren’t getting married.

After she goes to bring Amulya down, Vedanth suddenly realises that he is out of place and tries to leave but everyone forces him to sit down. Soon Amulya is called downstairs and Vedanth can’t help but stare at her. Amulya, on the other hand, doesn’t realise she is giving tea to Vedanth as she constantly looks down shyly. As soon as she sees Vedanth, she screams and drops the cup of coffee on him.

As he goes to clean up in the bathroom, Amulya is then redirected to Siddharth and Tarini and she offers them coffee. In the bathroom, Vedanth curses himself for coming to Amulya’s house and tries to reassure himself that it is not his place to stop her wedding. Outside, Tarini begins the talks by introducing her son and informing that he is a workaholic.

Siddharth too adds that what he liked about Amulya was that unlike other women who forget about their families after getting married, she will do no such thing. To this, Pari is relaxed in her mind and hopes that Ammu too accepts this proposal while Aadya feels sad that Amulya won’t be her sister-in-law. Sarika, on the other hand, is happy that whatever it is Amulya will be away from Vedanth.

Soon, Tarini sends Amulya and Siddharth to speak in private as they are the ones who have to decide after all. On the terrace, Amulya asks Siddharth to be frank if he has any questions. Siddharth responds by telling her that his mother has really liked him causing Amulya to think that he is shy. In the end, when he asks her if she liked him, Amulya is frank with Siddharth and tells him that if her parents have liked him, she has nothing more say to it.

Why didn’t Amulya answer him directly? Does she secretly like Vedanth? Stay tuned and you’ll know soon.

Want To Get A Fab Body Like Naagini’s Deepika Das? Try Out These 5…

Janaki-Nanditha To Geetha-Pinky: Here Are 5 Best And Worst Sisters-In-Law On TV
+
Explore More

Saheba Is An Adorable Love Story Starring Shanvi Srivastava And Manoranjan Ravichandran In The Lead Roles. Click Here To Watch This Film On ZEE5 Now

Gattimela 4 October 2019 Preview: Amulya Who Is Angry With Vedanth Lands Up In His Arms