In this episode of Gattimela, Gautham causes havoc in Aarthi and Vicky's life on his birthday. Also, Vedanth tries to expose Gautham in front of Ammu 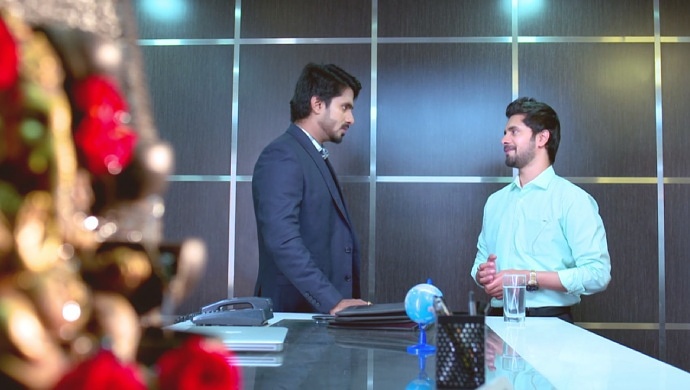 On the previous episode of Gattimela, Amulya sleeps off on Vedanth’s shoulders, much to his discomfort but he is helpless. At home, everyone is relieved to see Amulya, who slowly tells them what happened. Vedanth worries for Amulya all night. Seeing this, Vikranth is taken aback because his older brother never showed concern for any other woman except, his mother and sister. The next day, he wonders why Amulya hasn’t come to the office and tries to find out why from Kantha, who is taken aback by his boss’s question. Finally, with a tap on his shoulder, Amulya makes her arrival known.

On tonight’s episode of Gattimela, as Sarthak is asking Amulya about her health, Vedanth interrupts are makes it clear that he was looking for Amulya because he had to give her some work. Saying this, he goes into his cabin and asks her to follow. She, on the other hand, wonders why he is calling her like as if she is his wife. Meanwhile, Gautham enjoys getting pampered by Parimala and Aarthi’s sisters on his birthday. At the office, Amulya makes it clear that she doesn’t want to talk about what happened at the site after they both have a small argument about whose fault it was. He then promises to expose Gautham in front of her, but she doesn’t pay much heed and leaves the cabin.

At the Manjunath house, Gautham pretends that the sacred thread got lose from his hand and asks Aarthi to tie it again, much to her and Adithi’s surprise. When Parimala insists, Aarthi finally ties the thread on his hand again. In a soliloquy, Gautham promises Aarthi that he will make her pay for throwing away his ring. Just as he is about to feed Aarthi the cake, much to her reluctance, Vicky arrives there. He uses this opportunity and force feeds her. Vikranth gets furious and storms off from there. Gautham follows him out and instigates him further. This results in a huge fight between Aarthi and Vicky causing Gautham to be delighted.

Soon, Gautham goes to Vedanth’s office and finds Sarthak there. He is then accompanied to Vedanth’s cabin. Sarthak is sent out shortly after, following which Vedanth offers him water, claiming that he will need it after a few things are clarified. Elsewhere, Aarthi vents out her frustration to Amulya, who tries to console her sister. After the call, one of her team members informs her of Gautham arrival in the office. Worried, she rushes there. Meanwhile, Gautham reveals his true nature to Vedanth, who is not surprised that he is a fraud. However, after finishing his piece when he turns behind, Gautham is shocked to see Amulya.

Did Amulya hear his confession? What will Vedanth and Amulya do now? To find out, stay tuned.

Watch your favourite Zee Kannada shows, in HD and for free on the ZEE5 platform.

Doddmane Hudga Is Your Family Drama With Puneeth Rajkumar, Ambareesh And Radhika Pandith In The Lead. Click Here To Watch This Film On ZEE5 Right Away