On tonight's episode, Vedanth saves Amulya, who later dreams of him. Later, Aadya confesses to her granny that Ammu is Vedanth's girlfriend! 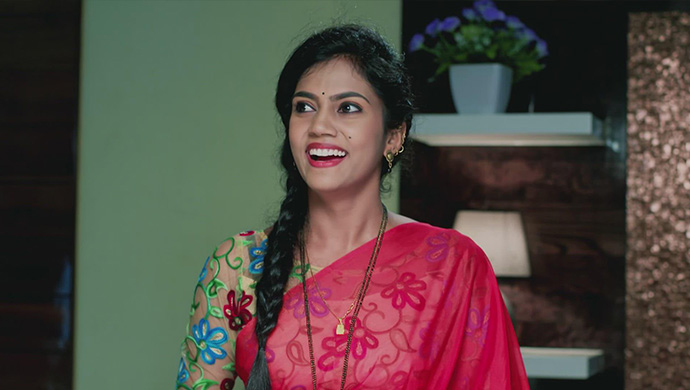 In the previous episode of Gattimela, Amulya makes Kishan delete the MMS clip and also rejects the dress he gave her by wearing her own clothes instead. Meanwhile, Vicky explains to Aarthi that the news was not his fault. Elsewhere, Kishan and Ramaswamy, who plan to trap Amulya, fail when Vedanth arrives there, enraged. Aarthi and Vicky, on the other hand, are surprised when Manjunath arrives home and supports them. Later, Vedanth teaches Kishan a lesson and asks them why Amulya is brought there.

On tonight’s episode, Vedanth tells Ramaswamy he didn’t understand why he asked Amulya to come here. Before he can get an explanation, Vedanth warns Ramaswamy that his career will be at stake if he tries to pull this stunt off with any other women. He then asks the politician to explain to his friends about exactly who he is and what he can do.

Soon, he takes Amulya by the hand and walks out of there. On their way out, Amulya watches Vedanth with affection as he leads her by the hand while recollecting the words he said earlier about their relationship. Elsewhere, Manjunath tells Aarthi and Vicky that after the incident with Amulya’s video on the news, he decided never to trust any such thing again.

He also gives them the assurance that he will always be in their support because he trusts them. Aarthi and Vicky are so touched by Manjunath’s words that they hug him simultaneously. Meanwhile, Kantha wonders where the two have been delayed when he spots Vedanth holding Amulya’s hand and bringing her to the car.

While a puzzled Kantha watches, they approach the car. Accidentally, when Kantha asks if Amulya is okay for him, Vedanth immediately responds with an okay and immediately regrets it. While he is scolding Kantha for his silly questions Amulya thanks Vedanth for his help.

Suddenly he does the unthinkable and brings Amulya close to his chest like a ‘half-hug’. On one side while Kantha jumps back in shock at this sight, Amulya too looks speechlessly at Vedanth. Then, Vedanth warns Amulya never to do something like this without telling him again and she agrees.

Since Kantha feels too dizzy at what he just saw he requests Vedanth to drive the car himself and asks Amulya to sit in the front. Meanwhile, Aadya and Sarthak scold Vicky for hiding such a piece of big news from them. He spends the next few moments convincing his little sister and her husband to forgive him.

After some fun moments, Aadya recollects that yesterday when she spoke to Vedanth he seemed disturbed and asks Vicky and Sarthak to check upon him. Amulya reaches her home soon afterwards and her sisters greet her with love and affection. When they ask her about how the trip to Mysore was, Amulya gets lost in her own thoughts and has a slight smile on her face.

With great efforts when they snap her out of it, she excuses herself and goes up to her room. On the way, she spots Vedanth still standing down waiting from her from one of the windows. He signals to her that he was waiting for her to switch on the light to her room and he also signals Ammu to take care of herself.

They both smile at each other before he waves her goodbye. At the Vasishta house, Aadya’s grandmother stops her and Sarthak from leaving and comes to the topic of grandchildren. Both of them get slightly dull thinking about the past but Aadya diverts the topics to the marriage of all her grandchildren before she becomes a great-grandmother.

Just then Vedanth arrives there and asks Aadya not to direct the topic towards him. However, much to his surprise, Aadya informs him that she wasn’t talking about his wedding but Vicky’s. Elsewhere, Amulya, who is trying to knit something is lost in thoughts about Vedanth and smiles about it when Adithi arrives there.

She wonders what is wrong with her sister and tries her best to snap Ammu out if it. Back at Vedanth’s home, his grandmother screams at him for being so careless about marriage and goes to bring some photos of girls that he can select from. Meanwhile, Adithi realises what will fix her sister and screams out to Vedanth.

It works and Ammu immediately looks out excitedly for Vedanth but realises he is nowhere around and feels disappointed. Looking at Adithi laugh so hard, Amulya gets confused and looks at her room and their empty room. At the Vasishta house, when Vedanth’s grandmother shows him some photos, he gets irritated and throws the photos away.

As Vedanth is being questioned if he likes someone, in particular, he blurts out that he has a girlfriend. To share the blame he tells his grandmother that he told Aadya about his girlfriend. But to his astonishment, when their granny asks Aadya about who the girl is, she takes Amulya’s name.

What is Vedanth’s reaction going to be this? Will he accept Ammu as his girlfriend? We’ll find out soon, stay tuned.

If Love-Stories Are Your Favourite, Watch Prema Baraha, Now On ZEE5

EXCLUSIVE: 12 Pics From The 'Vikshakare' Round This Weekend On DKDFW2 That You'll Love

Gattimela 2 December 2019 Preview: Vedanth Asks Amulya To Be His Girlfriend