Gattimela 29 July 2019 Preview: Parimala To Get A Heart-Attack By Gautham’s Confession?

In the next episode of Gattimela, when Aarthi slaps Gautham, in a rage, he reveals about her affair. Parimala cannot handle this and falls down! 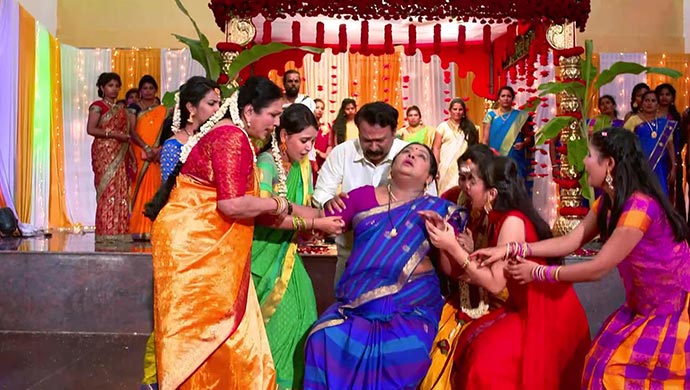 In the previous episode of Gattimela, the police bring Gautham right in front of everyone and then reveals about his true nature. However, soon Gautham recognises the cop as an actor and reveals that Vedanth is the one behind this horrid intrusion to the wedding. Just as things are getting physical between Gautham and Vedanth, Aditya and Paaru arrive there with the real police and evidence that Gautham is major fraud who marries women to make money and later sell them off. In the end, Sharada is brought into the hall and she confirms every word before slapping Gautham hard across the face.

On the next episode, Sharada sincerely thanks Paaru and Aditya for saving her at the right time. To this, Aditya says that the real thanks should go to Vedanth causing Amulya to look at him apologetically. Further, Paaru continues to assure everyone in the hall that as long as Vedanth is there no woman around him will be harmed. Later, when Aarthi slaps Gautham for his betrayal and screams at him, he retorts back by saying that she has no right of talking about betrayal when she herself loved someone else and was about to marry another man. Listening to all of this, Parimala gets a heart attack in the end.

When will Suhasini arrive? Is Parimala going to be alright? Stay tuned to find out.

Get The Weekend Entertainment Started With The Power Star Puneeth Rajkumar's Natasaarvabhowma, Streaming On The ZEE5 Platform

Gattimela 26 July 2019 Episode Written Update: Gautham Is Exposed Thanks To Paaru And Adi