Vedanth tries to express his feelings for Amulya but she keeps avoiding him. 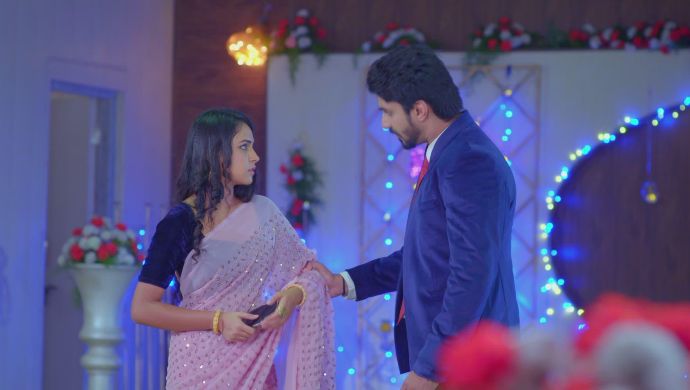 In the previous episode of Gattimela, Vikranth visits Aarthi’s house to invite them all for a party. In the office, Kanta is wondering if Sahithya’s entry into Vedanth’s life, will change him from being the romantic that he was with Amulya, to a more serious Vedanth that he always is. Meanwhile, Vedanth invites Amulya to the party.

Vedanth tries to talk to Amulya who is making the arrangements for the party. She tells him that he should just enjoy the party. She then makes arrangements to serve food to the guests. He follows her to the kitchen, too. When he tries to talk to her, Amulya tells him not to disturb her. He asks her if he has been a source of disturbance to her. Vedanth does not give up. He continues to follow her around asking her to talk to him. She keeps ignoring him.

Meanwhile, Vikranth has come to Aarthi’s house to pick her up. Her mother tells him that the rest of the family will attend the party later in the evening. At the party, Sarika gets jealous seeing Vikranth and Aarthi share a romantic moment.

Amulya calls her home and asks her father about when they will be arriving. Her father says that they are all tired and will not be attending the party. She tells him that she is feeling very lost and restless without them. He tells her to be with Aarthi if she feels this uneasy. She finally confronts Vedanth and asks him why he is following her. He tells her that in all these years, no one has ever avoided him. Now when he is trying to talk to her, not only is she avoiding him but also telling him that she is just his employee and nothing more.

5 Reasons Why Amulya And Niranjan's Kamali Is A Must-Watch