On tonight's episode, just when Amulya gives up her escape from Kishan's place, her saviour arrives. Elsewhere, Manjunath supports his children! 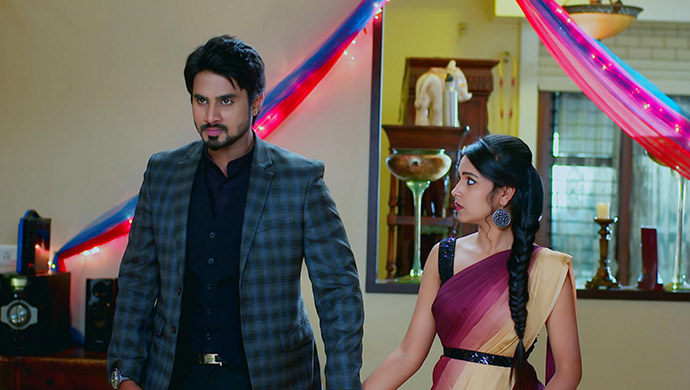 In the previous episode of Gattimela, Vedanth worries that Amulya might be in trouble while she reaches the location Kishan summoned her to. Amulya is soon told that she was called not to attend a wedding but to dance in front of politicians in a skin-showing dress. Meanwhile, Sarika blames the scandal on Vicky which makes Aarthi slap him hard. Later, Amulya covers herself in a blanket and luckily finds a charger so that she can send her location to Vedanth.

On tonight’s episode, Kishan is excited to present Amulya to his fellow politicians but everyone is shocked when she comes down covered in a blanket. Ramaswamy arrives there just in time when Kishan goes to Amulya and asks her in a soft voice about why she is putting up such a fit.

When Ammu reveals to him that before she dances in front of his friends he must delete Aadya’s video from his phone. She also reminds him that since his image in front of others has to be kept he doesn’t have much of a choice. With much reluctance, Kishan finally deletes the video and asks her to join them.

Another shock hits Kishan when Amulya removes the blanket and finds her wearing a saree instead of the dress given to her. Elsewhere, Vicky forces Aarthi to listen to him and informs everyone that his social media account was hacked so he has absolutely no idea how the images were leaked or who uploaded them.

To add to their peril, the neighbourhood ladies arrive there and speak ill about Aarthi and her character. This forces Aarthi to lock herself in the room upstairs just as Manjunath arrives at the house. Looking at Amulya in the saree, Kishan’s friends taunt him for bringing such a plain girl to dance for them.

Kishan retaliates and asks Amulya about her double but she doesn’t give a chance to say another word as she slaps him hard across the face. Ammu then scolds everyone standing there gravely by accusing them of being nice during elections and then earning the trust of people just to do this.

When she rebukes Ramaswamy too, he promises not to let her leave and calls his guards. Just then, a voice calls out to them and says that if anyone dares to touch Amulya or even breathe near her it will be their last breath ever. Everyone turns around and Ammu feels relieved to see an irate Vedanth standing at the entrance.

He comes inside and sneers at Kishan while Aarthi continues crying in her room. Soon, Manjunath arrives there and coaxes Aarthi to step out. The minute she sees her father an emotional Aarthi falls to his feet asking for forgiveness. However, Manjunath does the unthinkable and doesn’t say another word but takes Aarthi and Vicky by their hands and takes them down.

Elsewhere, Kishan tries to challenge Vedanth that he can’t do anything to them. When Amulya goes to stand behind Vedanth, Kishan asks his men to bring weapons to beat both of them up. However, Vedanth is too smart from them and informs Ramaswamy that it won’t take him long to beat up everyone present there but that would also mean that all information about the latter’s illegal businesses will be sent to the media.

This causes Ramaswamy to ask his men to lower their weapons. Meanwhile, Aarthi, Vicky and most of all Sarika is shocked to see that Manjunath is supporting his children against accusations of the neighbours. Everyone stands stunned as Manjunath asks the neighbours to mind their own businesses and take care of their children first before pointing a finger at others.

The neighbours say a few more words for them before leaving in a huff while Aarthi and Vicky become emotional be hug Manjunath for his support. At Kishan’s house, Vedanth holds Amulya’s hand when Ramaswamy warns him that he is doing the wrong thing.

He continues to ask Vedanth what his relationship with Amulya is and the answer shocks her. He tells them that the relationship between him and Ammu cannot be explained in mere words and neither do they have the worth to be given an explanation. Kishan gets upset with this retaliates but is cut off mid-sentence when Vedanth gives him a hard slap across the face.

Then, he tells Ramaswamy that he understands what is going on here but what he doesn’t get is why Amulya is here. This causes everyone including Amulya to stand stunned.

Will Vedanth learn the truth? What will Ammu say in her defence? Find out in tomorrow’s episode.

The ZEE5 Original Series Kaafir, Is Now Available To Watch In Kannada For Your Entertainment

Jothe Jotheyali: 9 Video Clips Of Anu-Aarya That Prove How Much They Love Each Other