Just like a reflex, Vedanth grabs Amulya's arms when she claims that nothing is bigger than the company. Elsewhere, Aarthi gets some startling news. 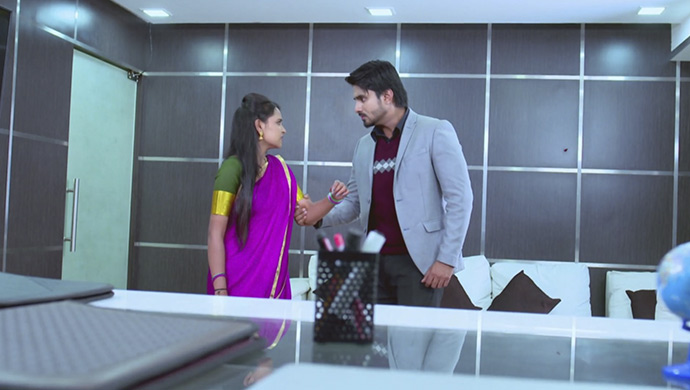 On the previous episode of Gattimela, Gautham enjoys the spoils of the fight between Aarthi and Vicky, by pretending to be in complete support of their love. Elsewhere, as Vedanth and Amulya are arguing on their way over to the office about the laptop running out of battery, the former spots Gautham with another lady sitting very close to him and is shocked. After Aarthi comes back home devastated, she explains everything to Adithi, who makes her realise some facts. Later at the office, Vedanth is shocked to hear that Amulya without his permission gave the presentation to the clients, and got them a deal of 3.5 crores instead of 2 crores, which they had initially proposed.

On the next episode, when Amulya announces to Vedanth that according to her no one is bigger than the company, he grabs her arm in anger and also moves dangerously close to her. Despite the pain on her face of the pressure, he is holding her arm with, Vedanth stares into her eyes deeply without letting go. At the Manjunath house, Parimala explains to Sarika how much she doesn’t like Vikranth and questions her niece about her life choices. To this Sarika coldly replies that she now has no intention of getting married to Vikranth. Aarthi is stunned to hear this.

Is this a part of Sarika’s plan? What will Amulya do now? Stay tuned to find out.

Watch The Latest Episodes Of The Prominent Show Mahadevi, If You Haven't Caught On To The Show After The Leap Just Yet! Only On ZEE5!