Vikranth, Adya, Aarthi, and Sarthak try to come with a way with which they could convince Vedanth, not to marry Sahithya. 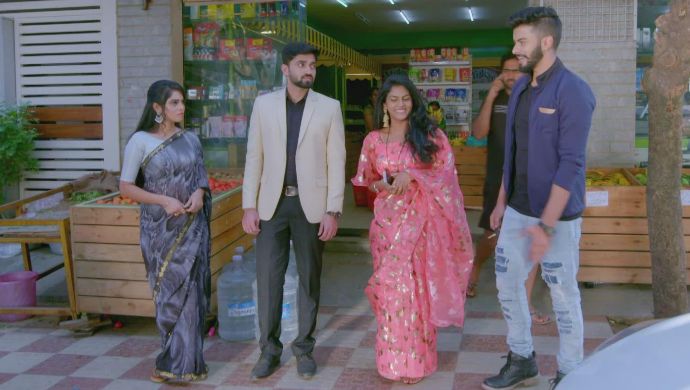 In the previous episode of Gattimela, Vedanth’s mother asks him why he did not come home earlier, when he knew that Sahithya was coming home that day. He tells her that he forgot. Ajji thinks to herself that he didn’t remember the same because he does not really love Sahithya. Later that night, Vedanth is lost in his own thoughts as he daydreams about Amulya. Vikranth asks him about the same and he tells him not to talk about such insensible things.

In this episode, Vikranth comes over to Aarthi’s house to invite them all for a party. In the office, Kanta is wondering if Sahithya’s entry into Vedanth’s life will change him from being the romantic that he was with Amulya to the old, serious Vedanth. He tells Kanta to call Amulya. When she enters the office, he tells her that she must bring her whole family to the party that evening. She nods in agreement. Vedanth is bothered by the fact that Amulya has become relatively quiet.

Meanwhile, Sarika and Suhasini are trying to create a plan that will stop Amulya from being with Vedanth and Aarthi from being with Vikranth. She also tells Sarika not to take any step further without her permission. Sarika agrees and tells her that she would never do that. Suhasini is furious with Sarika and tells her that she is aware of the fact that she tried getting married to Vikranth at the temple. She also adds that if Aarthi hadn’t stopped the marriage, she would have. Aarthi, Vikranth, Sarthak and Adya meet near the office to discuss about Vedanth and Amulya. Adya asks the two men if they have spoken to Vedanth about Amulya and the two say deny it. Aarthi tells them that none of their plans will work as Amulya has already given up. They are all surprised to hear the same.

That evening is the party. Vedanth sees Amulya in a saree and cannot take his eyes off her. He looks mesmerised. Amulya, on the other hand, is making arrangements. The two share a moment.

Sarthak From Gattimela Is An Ideal Husband To Adya And Here’s Why!