On tonight's episode, Vedanth can't help but think of Amulya all day only to find out the next day that she'll come late because of a proposal for her 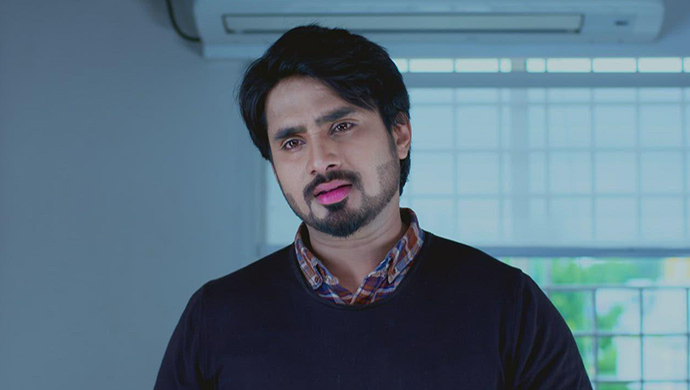 In the previous episode of Gattimela, Amulya, who plans a surprise gesture for Vedanth at the office, is rebuked by him for such non sense in the workplace. After screaming at everyone for wasting productive time, he storms into his cabin and blushes extensively thinking about Amulya. At the Manjunath house, Pari and Aarthi are startled when a lady, named Tarini comes to ask for Amulya’s hand in marriage for her son. Meanwhile, Vedanth daydreams that Amulya.

On tonight’s episode, Amulya enters Vedanth’s cabin and sweetly calls out to him, much to his astonishment. After a few moments, Vedanth, who assumes that Amulya is a figment of his imagination screams out to her and asks her to leave. Unfortunately for him, it turns out that Amulya is really in his cabin. At the Manjunath house, after clearing all qualms of Parimala about the wedding expenses and the time to decide, Tarini finalises the proposal of Siddharth for Amulya.

At the office, Vedanth pretends to be cool and scolds her again before asking her why she came to see him. Amulya, who is in a state of confusion about Vedanth’s sudden mood-swings is surprised when he allows her to come late the next day as Parimala has some important work for her to do. In the evening, as Amulya and Manjunath are having dinner, Anju, Aarthi and Pari stand uneasily and watch them.

While Parimala signals to Manjunath to say something about what happened earlier, Anju and Aarthi try to make a prediction of how their parents are going to bring this delicate situation in front of Ammu. With much courage, when Manjunath finally tells her about the proposal that came for her, Amulya thinks about it for a few minutes and agrees. Shocked, Pari, Aarthi and Anju watch in disbelief as Amulya smiles and asks Manjunath to ask them to speak to her directly.

Elsewhere, Sarika gets upset with Swathi and taunts for taking the money and never keeping her end of the deal. Irate, Swathi gives back all the money she received and informs her that had Amulya not saved her in time she would have never been able to forgive herself such a nasty crime. Sarika promises to teach Amulya a lesson for foiling all her plans. At home, Amulya is taken aback when her sisters try to question her about her plain reaction to the wedding proposal.

On the account that she didn’t get much sleep last night, Amulya avoids all questions and informs them that she has switched off her phone for no disturbance. Wishing her sisters goodnight, Amulya is off to bed. Elsewhere, Vedanth thinks about Amulya constantly about how she saved him but immediately rebukes himself for thinking about the bajari of his life.

Then, he tells himself that once he thanks her all his debts will be cleared and even if she thinks that he has a crush on her so what, it doesn’t make it true. However, irritation takes form on his face when her number is switched off. The next day, Suhasini gets upset that both her sons have stopped listening to her and complains to Sridhar. He, on the other hand, informs her that both her sons might, after all, agree to get married on the same day.

This worries Suhasini. After reaching office when Vedanth tries to find Amulya, he is shocked and disturbed to learn from Sarthak that a proposal has come for her, which is why she asked to come late the previous day.

What is Vedanth going through? Will Amulya marry someone else? Stay tuned to find out from Monday’s episode.

Inspired by Chitra’s Love For Healthy Food, Here Are A Few Quick Recipes…

Want To Get A Fab Body Like Naagini’s Deepika Das? Try Out These 5…

Maduve Mane: 5 Times Hindi TV Star Shraddha Arya Made Us Think She Is A Pukka…

Jothe Jotheyali Creates History, Becomes The No 1 Kannada Show In The State

Gattimela 30 September 2019 Preview: Amulya Accepts The Wedding Proposal For Her?