On tonight's episode, despite all of his efforts to keep Amulya out of his mind, Vedanth daydreams about her and BLUSHES! Vedanth...blushing, OMG! 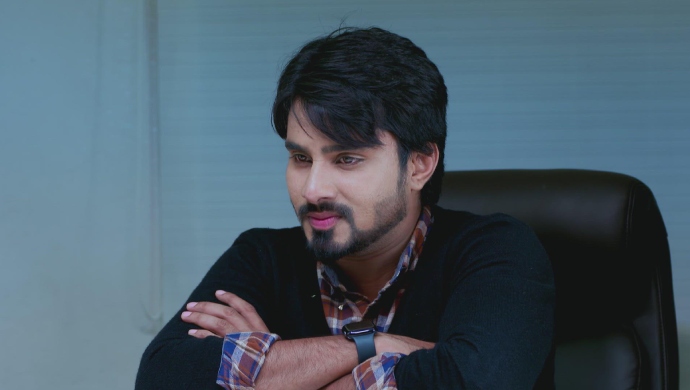 In the previous episode of Gattimela, Amulya returns to the station with Adithi, after no luck with Swathi. As the inspector is leaving to go home, Amulya demands the FIR even if they need to erase the complainant’s name. Upon close inspection, she clears Vedanth’s name by telling him that she was with her boss on the night in question, so there is no way he could’ve sexually assaulted anyone. A while later, a call from the complainant comes stating that she would like to take the case back. At the end, when Vedanth is freed, he thanks Amulya, much to Suhasini’s chagrin. At night, Vedanth goes into deep thought about why Amulya, his arch-nemesis helped him.

On tonight episode, Amulya and Adithi somehow divert their parents’ questions about where they were. However, Aarthi notices their discomfort and wonders what’s going on. Meanwhile, at home, Vedanth explains to Vicky about how Amulya saved him from jail and is confused about why she did so after them hating each other so much. They both bond over the incidents that took place recently.

The next day, Amulya leaves to the office early stating that she has some important work. Elsewhere, Vicky tries to make Vedanth rest at home, or go out somewhere, but he disagrees and goes to the office anyways. There, he is completely taken aback by a special surprise planned by Amulya. Not ready to socialise yet, Vedanth screams at her and everyone else and asks them to get back to work before storming to his cabin.

However, surprisingly, Vedanth sits on his chair and starts heavily blushing about what just happened while Amulya who is in disbelief curses him in her mind. At home, Pari, Aarthi and Anju bond over the latter’s urgency for finding her sports uniform’s tie. Back at the office, when Amulya intriguingly asks about Vedanth to Vicky, he doubts that something is going on between them.

Sarika, who overhears them talking learns that Amulya is absolutely not interested in Vedanth. At the Manjunath house, there is a knock on the door and a lady comes asking for Parimala. As Aarthi makes her comfortable in the hall, Pari arrives there soon and probes into the matter. To this, the lady introduces herself as Tarini and asks for Amulya’s hand in marriage to her son.

Shocked, Aarthi and Pari wonder how ‘rowdy baby’ is going to react to this and thank the heavens that she isn’t around. Upon asking how they found the Manjunath family, Tarini informs them that through Ashwath’s connection she learnt about their family. In Vedanth’s cabin, his consciousness appears in front of him as he is busy dreaming about her and asks him to focus on work.

Then, much to his surprise, he dreams that Amulya has come into his cabin and is calling his name lovingly.

What does this mean for Vedanth? Is he in love? You’ll know soon, stay tuned.

Watch all the episodes of Weekend With Ramesh Season 4, streaming here for your entertainment on ZEE5.

Anushka Vs Parvathi: Who Suits Aditya Best? It’s Time To VOTE For Your…

Watch The Latest Episodes Of Bramhagantu, Streaming For Your Entertainment Here On ZEE5

Gattimela 27 September 2019 Preview: Vedanth Assumes The Real Ammu Is A Part Of His Dream