Gattimela 25 September 2019 Preview: Amulya Reveals A SHOCKING Truth In Front Of Everyone

In the next episode, Amulya tells the cop that the statement given is filled with lies. When the inspector probes further, the truth shocks Suhasini! 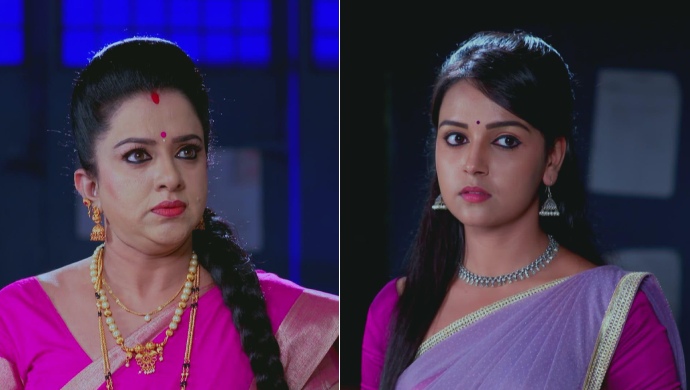 In the previous episode of Gattimela, Vedanth gets upset when he sees a lady constable dragging Amulya out of the station just as his family arrives there. While they learn that the complaint filed against Vedanth is a non-bailable offence, Amulya finds out from the lady constable that the complaint was filed by someone from their office. Upon getting to the bottom of this, Amulya learns that the culprits are Swathi and Sarika. Padma too finds out this secret from the horse’s mouth itself but Sarika threatens to kill herself if she opens her mouth. In the end, Vedanth takes the law into his hand by assaulting the inspector.

In the next episode, Amulya tells the inspector that there is a big lie in the complaint. To this, he gets irritated and asks her not to come up with new stories. Much to Vedanth’s disappointment, Amulya then reveals that there is no truth in the  learning complaint. Upon learning that Amulya was with Vedanth on the night that was mentioned in the complaint, Suhasini, Sridhar, Sarthak and Vicky stand stunned! She then looks at Vedanth and cannot believe her eyes!

How is Vedanth going to answer his mother now? Will the inspector let Vedanth go? You’ll find out soon, stay tuned.

Watch all the episodes of the ZEE5 Original Series Kaafir, streaming here on your ZEE5.

Auto Shankar Review: A Gritty Crime Thriller Based On A Real-Life Murderer Gowri…

All You Need To Know About The ZEE5 Original Series Kaafir, Available Now In…

If You Are A Duniya Vijay Fan, Watch His Hit Film Johnny Johnny Yes Papa, Streaming Here On The ZEE5 Platform

Dasara Special: 10 Traditional Outfits You Can Wear Inspired By Your Favourite Actresses