On tonight's episode, Amulya doesn't stop until she successfully brings Vedanth out of jail, much to his surprise! He gets into deep thought about her 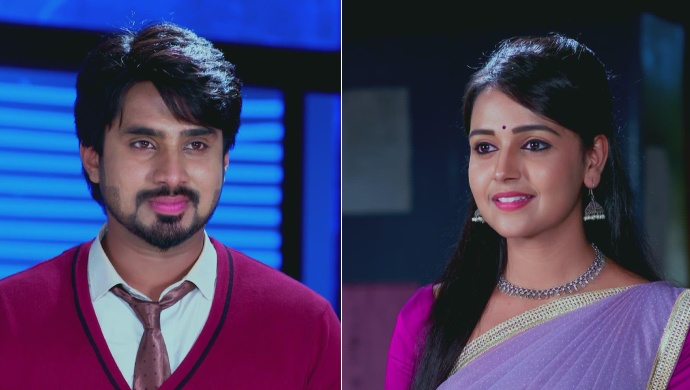 In the previous episode of Gattimela, Vedanth gets worried on seeing a lady constable dragging Amulya out of the station soon after which his family arrives there. Upon learning that the complaint filed against Vedanth is a non-bailable offence, Amulya is shocked to know from the lady constable that the complainant is someone from their office. It is not long before Amulya learns that the culprits are Swathi and Sarika. In the end, Vedanth takes the law into his hand by assaulting the inspector, who speaks rudely to Suhasini.

On tonight’s episode, Amulya tries her best to convince Swathi to speak the truth but she takes her mother away from there leaving the former and Adithi standing there helpless. At the police station, just as Amulya and Adithi arrive there the former looks helplessly at Vedanth. The lawyer then starts explaining about the obstacles the Vashishta’s will have to face because of such a case as the inspector arrives there and makes the announcement that he is going home.

Amulya interrupts the inspector and asks to see the complaint sheet. After much insisting, the inspector has no option but to scratch off the complainant’s name and show her the xerox copy. In a few moments, Amulya informs everyone that the report is false because, on the night in question, she was with Vedanth so it isn’t possible that he could sexually harass anyone.

Much to Vedanth’s disappointment, Amulya continues to tell the whole story as Suhasini, Vicky, Sridhar, Adithi and Sarthak look at her in disbelief. During this time, some unknown person secretly takes a video of this whole incident. All this time, a helpless Vedanth, worries for Amulya’s reputation outside if this is revealed but cannot do anything and stands in his cell speechless.

At the Manjunath house, Parimala asks Aarthi where Amulya is and finds out that Adithi has gone with her too and heaves a sigh of relief. At the station, a phone call disrupts the police officer’s mindset as the girl who filed the complaint takes it back. As soon as Vedanth is released from the cell he shows gratitude towards Amulya and thanks her for all her help.

Suhasini, who watches this, gets upset to see that her son has connected with another woman, something she never thought will happen. As they are exiting the police station the press stands outside to question Vedanth. Unfortunately for the Vashishta’s reputation, Vedanth picks up a fight with one of the journalists and things get physical.

Elsewhere, as Padma is consoling Aadya, Sarthak arrives there with the good news that Vedanth has been released, much to Sarika’s chagrin. At the Vashishta house, Vedanth wonders why Amulya, who has never spoken to him nicely even once fought for him so much when he was in trouble.

Has Vedanth started to feel for Amulya? Why did Amulya fight for him? You’ll find out really soon, stay tuned.

The Appani Sarath Starrer ZEE5 Original Series, Auto-Shankar, Is Now Available In Kannada For Your Entertainment

EXCLUSIVE: Mokshitha Pai Of Paaru: It Was Challenging To Play The Role Of A Village Girl