On tonight's episode, Vedanth makes many attempts to get Amulya to speak her mind, but she ends up treating him roughly. Will she regret it? 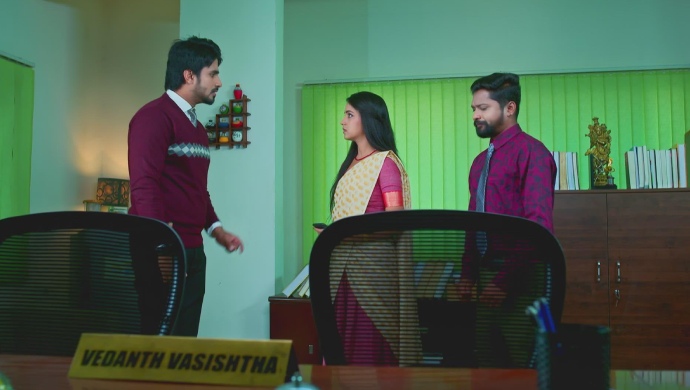 In the previous episode of Gattimela, When Ammu doesn’t react to the fact that Vedanth cooked dinner for her all by himself, it causes him to get worried. Soon, she thanks him for the drop home and goes away without another word. Later at night, when Ammu gets a call from a concerned Aadya, she somehow manages to hold her emotions together and tell Sarthak and her sister-in-law that she is okay.

On tonight’s episode, Amulya is stunned when Vedanth calls her ‘Ammu’ out of concern and asks if she is alright. In a matter of seconds, he realises the blunder he made and tried to clarify why he called her by that name. Just then Kantha enters the cabin and wonders about how these two have come to a pet-name basis now.

When he asks why he was called Vedanth dismisses Ammu saying that she may leave. This confuses Amulya, who then asks him why he called her in the first place. A poor Vedanth has a tough time correcting the situation and in the end, blames his fate for having such employees.

At home, as Manjunath is leaving, Vicky arrives there and requests him to give permission to take Aarthi out for shopping. They are thrilled when Manjunath gives permission and rushes out for work. Back at the office, Vedanth finally tells Amulya that she is supposed to go for a conference meeting in Mysore tomorrow.

When he asks her if she has any problems, Ammu quietly agrees and leaves the cabin without another word. Just then, Kantha speaks his mind aloud and asks Vedanth if he noticed something off about Amulya. Elsewhere, Vicky is surprised when Aarthi convinces him to take the bus with her to shop.

At the cafeteria, Amulya gets a voice message from Kishan warning her to quietly get into the car that will be sent to her tomorrow in the morning at eight, if she wants to save Aadya’s dignity. Just then someone taps on her shoulder from behind. Upon turning around, Amulya stands shellshocked to see Vedanth there.

Meanwhile, Aarthi and Vicky reach the market and she tells him that today he will experience her kind of shopping. Vicky gets extra romantic with Aarthi after the bus ride. At the office, Amulya is scared when she worries if Vedanth overheard everything.

Luckily for her, Vedanth has other questions in his mind for Amulya like what is wrong with her or why she is this dull since yesterday. She then directly tells him she cannot do the conference causing him to walk away in a huff. Ammu and Kantha run after him to his cabin while Vicky learns from Aarthi that shopping can be done in a less expensive manner.

During this time, Amulya tries to explain her situation to Vedanth stating that she had something personal to attend to. When he tries to probe about what could be so personal that she can’t share with him, Amulya gets upset and tells him clearly that neither is her boyfriend nor her to-be husband.

Saying this, she storms out causing Vedanth to stand rooted to his spot, helpless. The shopping at the market goes well as Aarthi explains to Vicky that for middle-class people spending money wisely is the only option they have to live a content life.

This causes Vicky to feel humbled and blessed to be getting married to such a simple woman. Meanwhile, Sarthak gives Aadya the bad news that Ammu has backed out of going to Mysore for the conference which means he will have to take her place.

At night, Amulya recollects everything that has happened in the past one day from the time Kishan showed her the video of Aadya changing to the time she screamed at Vedanth. A guilty Ammu wonders if she simply scolded Vedanth a little too much than usual.

Will she apologise to Vedanth? How is she going to tackle Kishan? Stay tuned, we’ll find out soon.

Watch Mugulu Nage, Now On ZEE5 For Your Entertainment