Vedanth tries to continue the conversation Amulya and he had earlier at the wedding hall but she does not say anything. 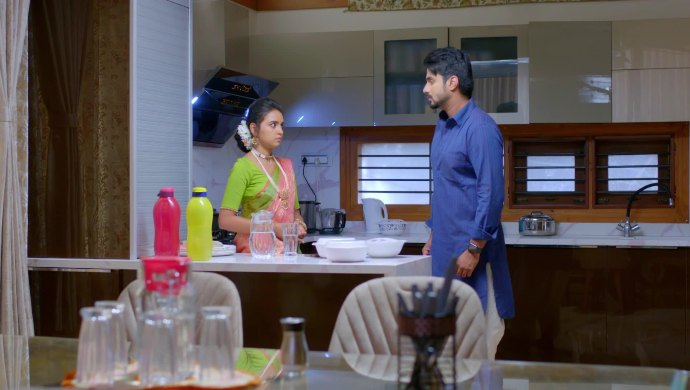 In the previous episode of Gattimela, everyone sends Sarika out of the marriage hall. As she is going out, she thinks to herself that Suhasini has ruined her life and so she will seek revenge at some point in time. She also thinks about how the whole family doesn’t know what she is capable of and so they have treated her in that manner. Amulya and Vedanth are standing together. Amulya just looks at Vedanth and smiles to herself. He also tells her that she is the main reason why everything succeeded and why the two got married.

In this episode, Aarthi performs all the rituals and enters the house. Everyone is delighted to have Aarthi as their newest member of the house. Amulya, too, has come to help her sister out. Adya, on the other hand, asks Aarthi to give her money as part of another ritual before she can enter the house. Vikranth tells her to let them in while Vedanth encourages Adya. As Aarthi makes her entrance for the first time into the Vasishta house, Suhasini mentally welcomes Aarthi into hell and tells her that she will make life very hard for her.

Elsewhere, Pari is concerned and tells Manjunath that as part of the rituals, the bride’s side is supposed to send home appliances to the groom’s house. However, as they are not very well- to- do, they have been unable to send anything. Manju, in reply to that, says that Vikranth’s family is very well off and they do not need anything from their side. He tries to console her.

Later that day, Vedanth comes to the kitchen to talk to Amulya who is making other arrangements as well as talking to Adya. As she is talking, she chokes on the water that she is drinking. He then tries to talk to her about her confession to him earlier. Amulya, however, tells him that she has other work to do and goes away.