In the next episode, Vedanth waits for Amulya outside her room to check on her. Surprisingly, she too is worried for him. Are they falling in love? 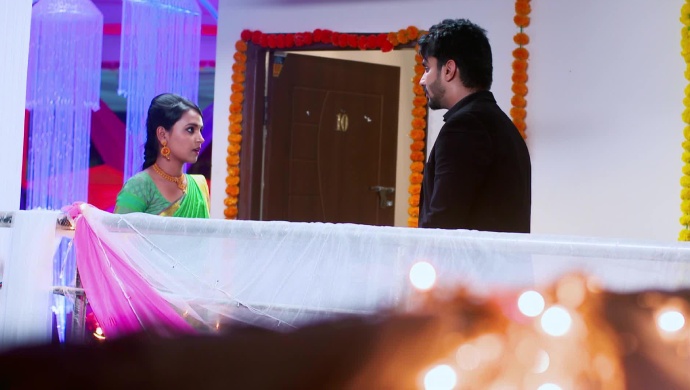 In the previous episode of Gattimela, Aadya is shocked to learn from Vedanth that Amulya is stuck inside the room that caught fire. He then attempts to break open the door and goes in to look for her. Meanwhile, a frantic Aadya goes to inform Sarthak about the fire and Anju overhears them. Soon, the entire family, who is worried for Amulya, is gathered a distance away from the room. During this time, Sarika tells Gautham that this could be a plan of Vedanth to buy more time for the wedding. In the end, Vedanth saves Amulya by carrying her out of the room and goes back in to save Vicky’s saree for Aarthi too.

On the next episode, Amulya comes out of her room to find Vedanth waiting for her. A few moments later they both speak and the same time asking about each other’s health. Vedanta then informs her that he had just come to find out if she is alright. Later, at the wedding altar, just as Gautham is planning to put the sacred thaali of marriage around Aarthi’s neck, someone from the far end of the hall screams and asks them to stop.

Who is this person? Like Gautham planned, are the police really here? You’ll know only if you stay tuned to the next update.

Watch Mummy: Save Me if you like horror-drama films, streaming in HD on ZEE5.

Are You A Rocking Star Yash Fan? This Weekend Gather Your Family And Watch His Hit Film Rajadhani, Streaming Now On ZEE5