In this episode, much to Amulya's disappointment, Gautham turns out to be exactly like Vedanth predicted. So will she allow the wedding to take place? 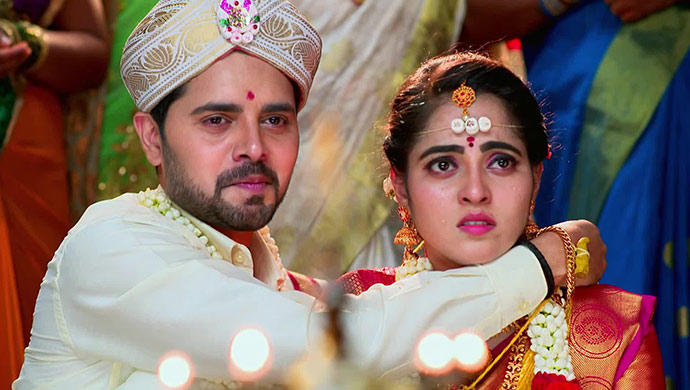 In the previous episode of Gattimela, Aadya is startled when Vedanth tells her that Amulya is stuck inside the room which is on fire. He tries to break open the door and finally goes in to look for her. Meanwhile, Aadya frantically tells everything to Sarthak but doesn’t realise that Anju has overheard them. Soon, everyone gathers around the room and gets worried for Amulya. Sarika who calls Gautham to the side tells him that this could be a plan of Vedanth to buy more time before the wedding begins. Thankfully, Vedanth saves Amulya in the end and carries her out of the room in his arms. Not only this, he then goes back in to save Vicky’s saree for Aarthi too.

On tonight’s episode, everyone including Amulya is shocked to see Vedanth carrying the saree that Vicky bought for Aarthi. He slowly gives it to Manjunath and leaves the place with a glum face. Shortly afterwards, he waits outside Amulya’s room to check up on her. When she comes out of her room, they both end up asks about each other’s health simultaneously. Then Vedanth tells her that he came to check up on her. An embarrassed Amulya turns her back to Vedanth and apologises with all her heart. After a lot of talking and no response when she turns to ask him why he isn’t talking she finds Adithi looking at her with a wide smile instead.

Annoyed that he had no patience to even listen to her, Amulya curses him again and goes back to her room. Soon the marriage ceremony begins and the bride and groom are asked to do some rituals. When the priest asks the family to take the plate with the thaali around the hall to get blessings from everyone, Amulya, Aarthi and Vicky wait for Gautham to take the cue and stop the marriage. However, when Gautham doesn’t seem to be interested in getting up, Vicky first thinks whether Vedanth was actually right about him. Soon, Aarthi, Adithi and Amulya are shocked to see that Gautham is continuing the marriage rituals and isn’t even trying to get. That’s when Amulya looks apologetically at Vedanth and both have a soliloquy conversation.

She apologises to him for never having trusted him and pleads to him to do something. Vedanth, on the other hand, signals to her that all this while he was trying to tell her exactly this, that Gautham is a fraud but she never believed him. He continues by signalling that it is too late to do anything now. Elsewhere, Suhasini and Paramananda travel to the wedding with the determination to stop it. By this time, Adithi finishes seeking the blessings of everyone in the hall for the thaali and returns with much angst against Gautham. The wedding proceeds and the auspicious rice that is thrown at a thrown as blessings is distributed to everyone on stage.

While Aarthi almost has a heart-attack Vicky looks angrily at Gautham who is just about to tie the thaali when someone calls out from the entrance of the hall and everyone stops. A couple of policemen then gather around Vicky and Vedanth, much to everyone’s astonishment, except Sarika and Gautham who are happy that their plan worked.

What will happen to the wedding now? Will Gautham be successful in marrying Aarthi? You’ll have to stay tuned to tomorrow’s episode to find out.

Test Your Wits By Watching The Horror-Drama Film Mummy: Save Me, Starring Priyanka Upendra And Yuvina Parthavi, Streaming Now On Your ZEE5