On tonight's episode, Amulya hugs Vedanth when she feels helpless about the whole Aarthi-Vedanth situation. He then promises her that he'll fix this! 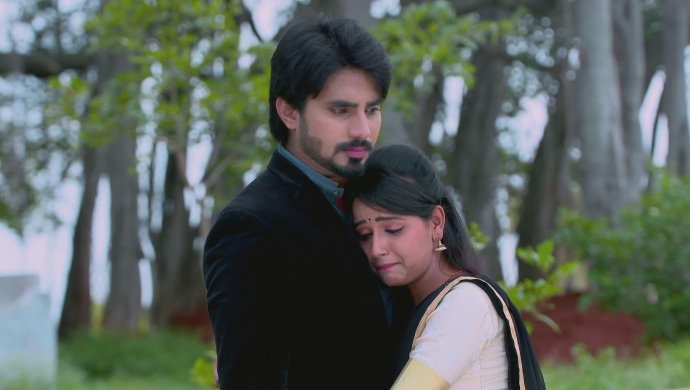 In the previous episode of Gattimela, everyone including Vicky tries their best to make attempts to learn the truth from Aarthu but she just sobs endlessly. Amulya, who cannot get through to Vedanth curses her luck while he tries to speak to Vicky, who is very disturbed with everything that just happened. Only later when Aadya tells Vedanth what happened, does he realise why Amulya was calling him. When he hears her cry on the phone, Vedanth reaches the location of the meeting and sees her rushing towards him. An inconsolable Amulya then rushes into Vedanth’s arms.

On tonight’s episode, upon seeing Vedanth, Amulya and he run towards each other. However, Vedanth is taken aback when a sobbing Amulya runs into his arms instead. Sobbing gently, she demands an explanation as to why he wasn’t available when she tried calling him so many times.

Vedanth, who is at first uncomfortable with her hug, soon tries to console her (without hugging her back) but she continues crying and telling him that a blunder has happened at home. Meanwhile, Aadya confirms with Sarthak, as they are watching the two hug from a distance, that there is definitely something going on between Ammu-Vedanth.

Finally, after asking her to calm down when he tells her that Sarthak and Aadya have come along too, Amulya realises that she was hugging him all this while and awkwardly but slowly let’s go before she looks in Aadya-Sarthak’s direction. They soon come over and Vedanth asks her to tell them exactly what happened.

He also doubts if Vicky had anything to do with this but the other three reject this idea. Finally, he gently pats Amulya on her shoulder, much to everyone’s surprise, and assures he will take care of everything. Before leaving he tells Sarthak to take his car and drop Amulya home while he asks Kantha for another car.

As he is walking away, Amulya hides behind Aadya to secretively see and smiles. Elsewhere, Suhasini defeats Paramananda in chess much to his shock. She then explains that that’s how she wins at all her games, by looking in the places where people are not looking.

She continues to tell him that, she is a person who always keeps an eye out for opportunities and had Amulya not slapped her, she would have even felt pity for Aarthi and made her, her daughter-in-law. Paramananda is puzzled at this statement and probes as to what she has done.

Suhasini goes to him and proudly tells her brother that she concocted a plan in which Aarthi herself cancelled the wedding. While they both don’t notice, a flabbergasted Vedanth stands outside the room and is gets upset about this confession his mother just made.

At the Manjunath house, Pari beats up Aarthi for toying around with them, causing her husband to step in between and scream at her. Pari, who is in tears by now, complains to Manjunath that till date he hasn’t scolded her so loudly but because of Aarthi, he even went to that extent.

Rejected, Pari tells everyone that despite all their problems she was happy that both her daughters will be getting married, but now she doubts if even one will get married. Saying this, she storms off. At the Vashishta house, a delighted Paramananda asks for more explanation to his sister’s devious plan and thus Vedanth finds out from his mother first-hand that she asked an accomplice to bribe a priest who told Aarthi that if she gets married to Vicky, his life will fall in danger.

She also confesses to Paramananda that she is doing all this only because Vedanth opposed her for the first time. This causes Vedanth to be shocked and uncomfortable to learn that his mother could do something like this. Unable to take it anymore, he leaves from there but misses the main confession of Suhasini which was revealing the name of her accomplice: Sarika.

What is Vedanth’s plan of action now? How will he tackle this huge problem that is his mother? We’ll know from tomorrow’s episode, stay tuned folks.

Deepavali 2019: Here’s The A-Z Of The Festival Of Lights And Its…

Gattimela 25 October 2019 Preview: Vedanth Asks Amulya If She Trusts Him