Amulya steps into Vedanth's house for the first time and is amazed. Unfortunately, the start of her day is bad because of Suhasini! 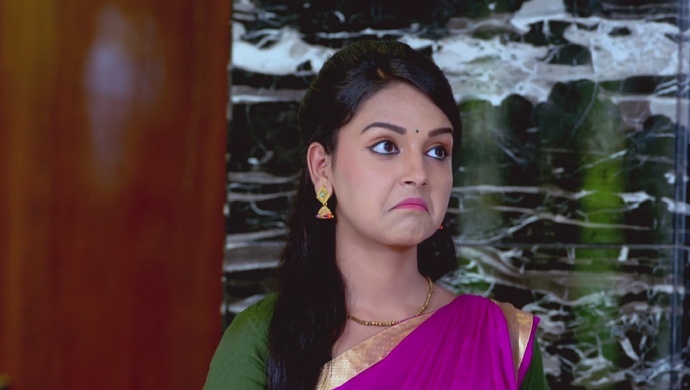 In the previous episode of Gattimela, Vikranth is shattered when he sees Aarthi and Gautham performing the sacred ritual at the temple and storms away. Meanwhile, at the office, Amulya gets to business and completes her task quickly. When she goes to show-off about her quick work to Vedanth, he is stunned alongside Kantha and Sarthak. Vedanth, who cannot digest this, calls up Amulya late in the night and demands some report to be submitted by eight in the morning, the next day. Somehow, Amulya finishes this task and reaches his house, only to accidentally drop juice on Suhasini’s saree.

On tonight’s episode, Vikranth politely welcomes Amulya to his house and asks her to go wait inside for him. As she settles on the couch in the hall, she hears Suhasini walking behind her asking all the maids to make themselves invisible before Vedanth comes out of his room. Just as Amulya gets up to greet Suhasini, they both run into each other and this causes some of the juice from former’s glass to spill on the latter. Irate, Suhasini starts yelling at Amulya for ruining such an expensive saree. Despite Amulya’s attempts to defend herself, Suhasini continues insulting her, till Vicky interrupts them. When he informs his mother that Amulya is there on Vedant’s request, Suhasini looks at him in disbelief.

Meanwhile, at the Manjunath house, Aarthi worries about how she is going to meet Vikranth, especially after he is upset because of the sacred ceremony that took place yesterday. When she tries to take permission from Parimala to go to the temple, she is turned down. Acting as the hero of this situation, Gautham arrives there and assures Parimala that he will take Aarthi to the temple and back safely. At the Vashishta house, Suhasini is further shocked when Vedanth himself reveals why she is here. Soon, Vicky asks her to join them for breakfast, much to everyone’s hesitation. Although Amulya joins them on the table, she worries that she is might goof up in showing the correct table manners and thereby upset her boss.

Thanks to Vicky, Amulya is soon made to feel comfortable and chomps on breakfast. He then excuses himself on the pretext of some important work and rushes out of the house in a hurry, leaving Amulya, Suhasini and Vedanth on the same table. After some time, Vedanth and Amulya sneeze simultaneously causing Suhasini to get startled by the sight. Elsewhere, Vicky reaches the temple and is very excited that finally, it will be Aarthi’s turn to apologise to him for a change. Much to his astonishment, Aarthi arrives at the temple with Gautham. After she thanks him for helping her meet Vikranth, in a soliloquy, he confesses that his aim is only to create misunderstandings between both of them, while gaining Aarthi’s trust.

Suhasini tries to find out why Amulya and Vedanth are sneezing at the same time and doesn’t get a proper reply from either of them, causing her to be puzzled. When he gets up to leave, Amulya asks to go with him too, much to Suhasini’s dislike. Vedanth then remembers that her ‘gujri gaadi’ is at the office and agrees to take her with him. At the temple, Vikranth makes it clear to Gautham, that he doesn’t appreciate him tagging along with Aarthi as he is very possessive when it comes to matters of love. Aarthi gets upset with Vikranth, much to his astonishment, for speaking rudely to Gautham. Using this as the perfect opportunity, Gautham apologises to Vicky and starts removing the sacred thread tied on Aarthi’s hand.

Will Aarthi stop him? What will Vicky do next? Stay tuned till Monday’s episode, to find out what happens next.

Catch your favourite shows on Zee Kannada, for free on ZEE5.

Puneeth Rajkumar Starrer Natasaarvabhowma Has Just Released On The ZEE5 Platform, So Gather Your Family This Weekend And Watch It Without Fail

Breaking News: Kamali’s Annapoorna Has Finally Found Her Mommagalu. Guess Who Is She?