In this episode, Vedanth goes frantic when he realises that Amulya is stuck inside the room lit on fire. He then puts his life at risk to rescue her! 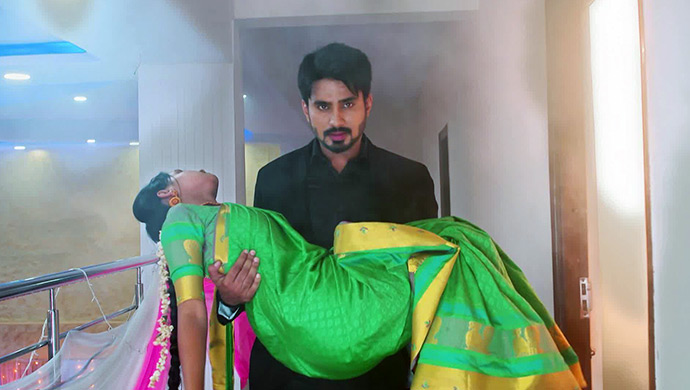 In the previous episode of Gattimela, Aarthi and Vicky get stressed about what will happen as the wedding rituals begin. Amulya, who feels guilty for accidentally bruising Vedanth somehow makes him accept medical aid from her side. Things take a drastic turn when Vedanth slams the door on Amulya’s face after an argument. Furthermore, the door lock gets jammed and Amulya is trapped inside the room. Later, Aadya is asked to bring the Dharane Seere for Aarthi but before she can do so, Amulya not only sets fire in the room again by accident but at the same time faints as well after seeing blood on her toe (due to kicking the door multiple times).

On tonight’s episode, a frantic Vedanth informs Aadya that Amulya is in the room that is on fire. He pleads her to run and call Sarthak immediately. Then, after what seemed like a million attempts Vedanth gets into the room and calls out for Amulya. Meanwhile, Suhasini gets upset for not finding Paramananda anywhere on the given location. Suddenly she finds him getting beaten up by a few people on the roadside and breaks up the fight. She takes him along to the wedding venue while Aadya comes rushing to Sarthak and informs him about the fire. Anju overhears this and informs Parimala of the same. Everyone is shocked by this and rushes to the room. Despite their protests, Vicky and Sarthak prevent them from going near the fire.

Sarika uses this opportunity to call Gautham to one side as everyone impatiently awaits for Amulya and Vedanth to return from the room. Meanwhile, after searching for a long time, Vedanth finally finds Amulya at the bottom of the bed and pulls her out. He then tries his best to wake her up but an unconscious Amulya doesn’t budge. Sarika tells Gautham that it could be possible that Vedanth started the fire to buy time till he can bring Sharada to the wedding. Elsewhere, Vicky uses the opportunity to give words of comfort to Parimala and promises her that as long as Vedanth is there, Amulya will be fine. In the room, when Vedanth fails in reviving Amulya, he decides to give her CPR and approaches her. Just as he reaches her face she starts coughing and wakes up.

Upon seeing him, she gets furious and holds his collar. Outside, as planned, Gautham taunts Vedanth and tells everyone that even if he can’t do anything the fire brigade in on the way. Back at the room, Amulya pushes Vedanth away before realising that whole room has caught fire. They both soon start fighting about why she got stuck in the room in the first place. As he is trying to ask her to leave, she faints again and this time on his chest. With much annoyance, Vedanth then carries her. Meanwhile, everyone gets irritated when Gautham tells them that he thinks something is wrong inside. Much to his annoyance, just then Vedanth brings Amulya out in his arms. Everyone is relieved to see both of them while Amulya is surprised to see Vedanth carrying her.

After giving Amulya to her family, Vedanth goes back into the room, much to everyone’s astonishment. Everyone prays for him while Sarika confirms with Gautham that this is indeed a plan of Vedanth to buy more time. However, when Vedanth returns with the saree Vicky chose for Aarthi, everyone is amazed. Vicky hugs Vedanth in relief in the end.

Will Vicky believe Vedanth’s intentions at least now? What is Gautham and Sarika’s way forward? To know this, you have to stay tuned.

Watch your favourite Kannada content, streaming for free only on your ZEE5.

All Shivarajkumar Fans Don't Forget To Watch Vajrakaya This Weekend With Your Family, Streaming In HD On Your ZEE5