Amulya drops Vedanth home. Later, he imagines sharing a romantic moment with her 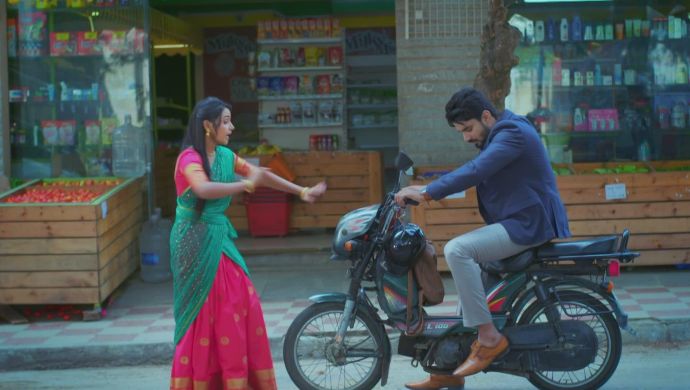 In the previous episode of Gattimela, Kanta tells Amulya that she should work towards being with Vedanth, to which she agrees. Elsewhere, Vedanth asks Sarika about Sahithya’s whereabouts, as she has to give a client presentation that day. Sarika tells him that Sahithya has not followed up. Amulya then intervenes, and makes the presentation instead. Everyone is happy about the same.

In this episode, Amulya has punctured the tyre of Vedanth’s car. After realising the same, Kanta ends up making a light moment out of it. He tells Vedanth that he could go with Amulya on her scooter and thinks to himself, that she has started her war with Sahithya, and is sure to win Vedanth’s heart, by the end of this. Vedanth plans on booking a cab, but his phone dies due to low battery. He tells Amulya the same, as she begins to start her bike. She tells him that it doesn’t matter how they travel, as long as they reach the desired destination. The two have a comical moment, when he makes fun of Amulya’s scooter, telling her, that he is surprised her bike is even in a condition to be ridden.

Amulya hands over the bike to Vedanth, so that he can ride it. As he is riding, he wonders to himself about what had gotten into her, the previous night. He suspects that someone might have spiked her cold drink, which resulted in her strange behaviour. He also wonders why she was happy that day and tags her as a complicated personality.

Meanwhile at home, Anjali asks her mother to buy her a laptop. She also tells her that a laptop will cost around Rs. 30,000 but is in dire need for the same. When her mother refuses, she gets disappointed. Later that night, Vedanth imagines sharing romantic moments with Amulya. When he is brought back to reality, he tells himself that he has one goal, and that is, to get Vikranth and Aarthi married. He promises to not think of Amulya.