Vedanth puts a revenge plan in place for Amulya and calls her at midnight to give her, her next task. What will Amulya do now? Find out what happened! 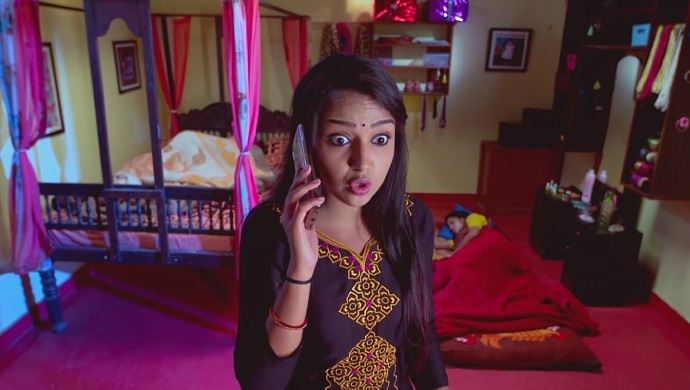 In the previous episode, Vedanth tells Amulya that he’ll find a way to fire her legitimately within the next seven days. Then, he gives her the task of segregating long-grained rice from a sack. The challenge is to separate the millets mixed in. At the temple, Vikranth closes in, to the spot where Gautham and Aarthi’s pooja is taking place. She worries that Amulya isn’t by her side yet, the rituals begin. Amulya later finds a solution to complete her task and gets straight to work. In the end, Vicky is stunned to see Aarthi and Gautham sitting at the altar, performing the pooja.

On tonight’s episode, Aarthi reluctantly ties the sacred thread around Gautham’s wrist, causing Vicky’s heart to shatter. Gautham meanwhile, thinks of how is he is going to ruin her life in soliloquy. When Aarthi notices him she is all the more devastated and signals of his arrival to Adithi. At the cafeteria, Amulya calls for help and easily sorts out the long grained rice from the millets, much to her relief. Soon, the priest asks Aarthi and Gautham to touch everyone’s feet, signifying that the ritual is now complete and that in fact, Aarthi cannot remove the thread at any cost. Soon, Amulya is ecstatic to rub it in Vedanth’s face that she is done with the task he gave, much to his, Kantha’s and Sarthak’s surprise.

She then slyly reminds her boss that there is still a week to go and leaves the office for her well-deserved half day. At night, as the sisters are sleeping in their room, the sound of Amulya’s phone ringing awakens Adithi, much to her irritation. Finally, when she makes Amulya wake up and check her phone, guess who calls her? Shunti Shankara of course! Annoyed, she receives the call and realises that he is not calling to apologise but has called to give her another task to be completed by 8:00 AM tomorrow morning. Before she can retaliate, he explains everything and hangs up. Amulya, in her sleepy state, gets to work but not before all her sisters join in and help her finish the work fast.

They do this in their own unique way. In the morning, Parimala is startled to find Anjali and Ammu fast asleep on the swing in the hall. Amulya wakes up with a jolt shouting out Shunti Shankara’s name just as Manjunath is explaining to his wife, how his daughter’s stayed up the whole night to help their sister. She quickly gets ready and rushes to Vedanth’s house, and reaches there on time, might I add. After she is given juice she is about to go somewhere with her glass when Suhasini passes her way. In a small dash, some of the juice spills on Suhasini’s saree.

What will Suhasini do now? Will Amulya get to face embarrassment again? Stay tuned to find out.

Watch your favourite shows on Zee Kannada, for free on the ZEE5 platform.

Gattimela 24 May 2019 Preview: Suhasini Insults Amulya Till Vicky And Vedanth Defend Her