In tonight's episode, Amulya dreams of Vedanth learning about what she did. Later, Vicky assigns an impossible task to Amulya! Will she do it? 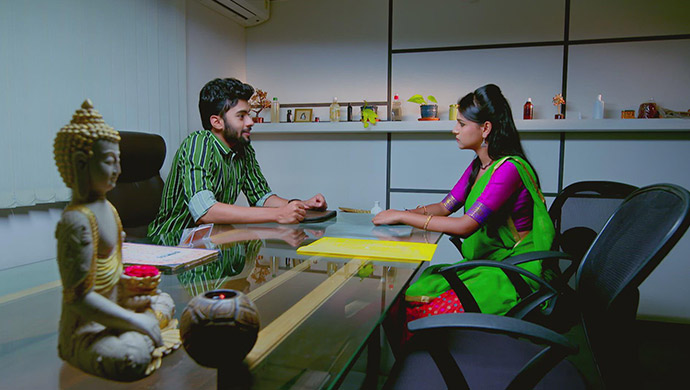 In the previous episode of Gattimela, an irritated Vedanth scolds Srivatsa for taking such a hasty decision while Amulya plans to teach a lesson to Shunti and his employee for playing with Pavi’s life. Elsewhere, Suhasini goes to the Manjunath house and invites everyone for the Ganesh Chaturthi party in her house. Aarthi is relieved when Suhasini further informs them that she will inform everyone about Vicky’s love life on that day. In the end, with the help of Dinesh, Amulya makes a video against Vedanth just to threaten him but it becomes viral and people start troubling the latter.

On tonight’s episode, as Amulya is cursing Dinesh for releasing the video online for his own benefit, Vedanth comes there much to her shock. She tries to deny what she did but Vedanth reveals that he has heard her confession already. When Vedanth promises to take revenge, Amulya tries running away from him, but in vain. Scared, Amulya closes her eyes and prays that nothing happens to her. Luckily, she realises that she is dreaming.

Elsewhere, Vicky gets upset looking at the news about his brother just as Suhasini arrives there. His mood changes to a happy one when she tells him about her visit to the Manjunath house. More praises come to her when Suhasini informs him that his engagement date will also be fixed on the Ganesh Chaturthi get-together day. Back at home, Amulya is in disbelief when Adithi scolds her for shooting a farce video about her ‘Vedanth Bhava‘.

Suddenly, Ammu’s phone rings and who could it be? Yes! Shunti Shankra calls her. Downstairs, Pari consoles Manjunath and tries to make him understand that even though Suhasini’s behaviour isn’t justified, for their daughter they have to make sacrifices. After much convincing from Adithi, Amulya finally answers Vedanth’s phone and pretends that everything is fine on her end. She is shocked when Vedanth asks her if she had anything to do with the fake video.

Amulya immediately tells Vedanth that it isn’t surprising that for his nature someone didn’t do this earlier. She takes Adithi’s help in making Vedanth believe that she is innocent and he finally buys her lies. The next day at work, Amulya realises that she is wearing the same scarf as in the fake video. What is scarier is when Vedanth walks into the office just at that time. Somehow, she drops the scarf behind her and pretends that her earring is stuck to her half-saree.

To her surprise, after scolding her a little, Vedanth actually helps untangle her earrings. During this time, Amulya smartly kicks the scarf on the floor under her table. Once done, he spots the video on the TV and promises to make whichever girl who made this fake video, pay. Soon, Vedanth ends up apologising to someone higher in position than him about the fake video and explains to them that the video is just to tarnish his image.

He then tells Kantha to watch out for the woman who has a blue scarf because she is the one who is desperately trying to ruin his life. Elsewhere, Vicky takes Amulya to his cabin to discuss something important. After explaining that even though Suhasini went to the Manjunath house, Vedanth will never accept marriage especially after what that girl did, Vicky asks Ammu to take up the impossible task of convincing Agraja.

What is Amulya going to do now? Will she succeed in convincing Vedanth? Stay tuned to the Monday’s update to find out.

Gattimela 26 August 2019 Preview: Vedanth Gets Love-Letters In The Form Of Emails