In this episode, Vedanth loses to Gautham once more and Amulya gets angrier than ever. However, after accidentally hurting him she comforts him too! 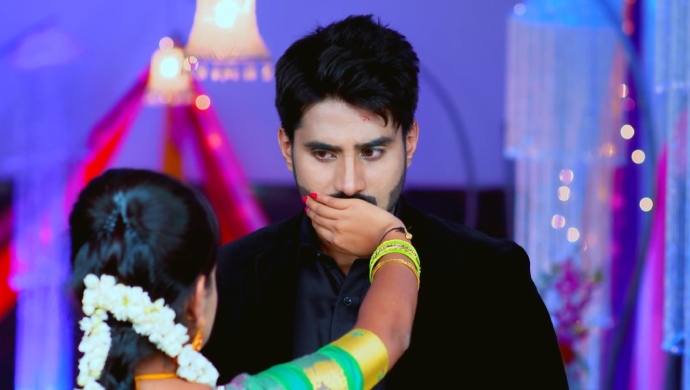 In the previous episode of Gattimela, the Gowri pooja is done successfully just before the Kaashi Yaathre when the groom is summoned. Despite Vedanth’s confidence that he won’t be found, Sarthak and he are shell-shocked to see Gautham entering the venue with flowers in his hand. He later tells Vedanth mockingly that he was never kidnapped at all. Later they find out that Kantha and the goon ended up kidnapping Paramananda by mistake. In the end, a worried Amulya calls up Vedanth and tells him about Vikranth is missing.

On tonight’s episode, Padma takes Sarthak to complete the ‘Kaashi Yaathre’ ceremony, much to his annoyance. Despite a taunt from Sarthak, the ritual continues smoothly. Then Parimala and Manjunath clean and worship Gautham’s legs according to the ritual. Elsewhere, Vedanth gets not one but three consecutive letters from an unknown person. In the letters, Vedanth is shocked to find out that Vicky has been kidnapped and won’t be returned until Aarthi and Gautham’s marriage. An irate Vedanth, storms to the place where Gautham is and catches him by the collar to ask Vicky’s whereabouts. Amulya makes many attempts to calm Vedanth down and out of frustration accidentally pushes him to the corner of the bed. He still continues to accuse Gautham, who finally accepts that Vicky is with him.

A shocked Amulya tries to find out more. Gautham then reveals that it is true that someone was trying to kidnap Vicky, but he saved him from harm. To Vedanth’s bad luck, Vicky arrives there and agrees to everything Gautham said. Amulya vents out her anger to Vedanth and asks him to stay out of this. Soon, everyone leaves and Gautham finds Vedanth alone in the room. To tease him even more, Gautham informs him that the wedding is half-an-hour away and still he couldn’t do anything to stop the wedding. Meanwhile, Paramananda makes an escape from the hideout and somehow finds a phone to call Suhasini. Upon hearing that her younger son loves none other than Aarthi, a furious Suhasini decides to go to the wedding venue herself to give the Manjunaths a piece of her mind.

Later, Amulya finds Vedanth and wonders why he is holding his forehead. She feels guilty to learn that she caused him the bruise while pushing him earlier. Vedanth pleads to her to support him or at least believe him about Vicky but she doesn’t listen. However, when Vedanth tells her that if something were to happen to his brother, he doesn’t know what he will do, she puts her hand on his mouth to stop him from saying anything further. After an intimate moment, she snaps out of him and pushes him again, to cause hurt on the same spot that was bruised before. With even more guilt, she tries to comfort him but he pushes her away and storms off. The wedding mantapa is soon ready, and a sad Aarthi walks down the aisle. Parimala and Manjunath get emotional looking at Aarthi, while Amulya and Anju pray to God that everything should go fine.

Who will Aarthi get married to? Will Vedanth be able to do anything to stop Gautham? Stay tuned to the next update to find out.

Watch your favourite Kannada movies, streaming in HD on ZEE5.

If You Are Into Films That Dwell Into Social-Evils, Beautiful Manasugalu Is The Kind Of Film You Bookmark Right Away. To Watch The Film On ZEE5 Click Here

Gattimela 23 July 2019 Preview: Vedanth Decides To Give CPR To An Unconscious Amulya