In the next episode, much to the amazement of Kantha and Sarthak, Vedanth tells the latter to ask Amulya not to worry. Elsewhere, Amulya makes a plan! 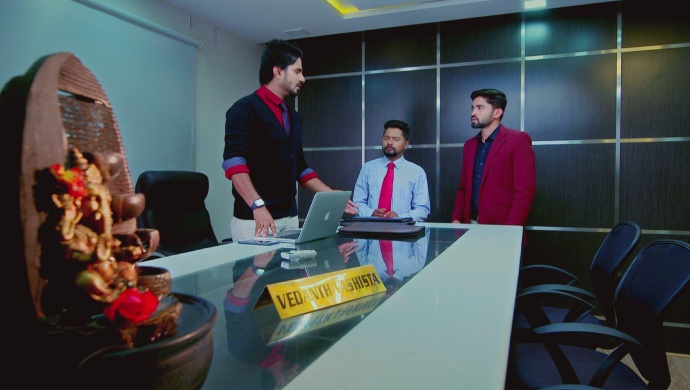 In the previous episode of Gattimela, while figuring out a plan to deal with the current heated situation, Amulya accidentally proposes to Vedanth to explain a simple concept to him. The next day as Amulya and Vedanth are arguing about something, the former receives a shocking call from Pavi, who is in tears. Amulya soon gets angry to learn that it is because of Vedanth that Srivatsa ran away one day before his wedding. Later, on one hand, while Amulya comforts Pavitra and gives her words of encouragement, Sarika on the other hand, takes the first step in ruining Aarthi and Vicky’s already strained relationship.

In the next episode, Vedanth tells Sarthak that Srivatsa’s sudden change of heart is unacceptable and summons him to the office immediately. Much to Kantha and Sarthak’s surprise, Vedanth then indirectly tries to tell his brother-in-law to ask Amulya if she needs any help. While Sarthak agreed and immediately leaves to get the work done, Amulya takes her colleague to meet Pavitra and thinks about a plan to teach people like Srivatsa a lesson.

Will Amulya be successful in her plan? Why is Vedanth worried about Amulya? Stay tuned the next update to find out.

Give yourself a laughter therapy with the film Melkote Manja, here on your ZEE5.

For Some Sharan And Ashika Time, Watch The Comedy-Thriller Film Raambo 2, Streaming In HD On Your ZEE5 Platform