Gattimela 22 April 2019 Written Update Of Full Episode: Vedanth And Vicky At An Impasse

Vedanth's attempts to find out whom Vicky loves are unfortunately foiled. Finally, he uses his own methods to get to the bottom of this situation. 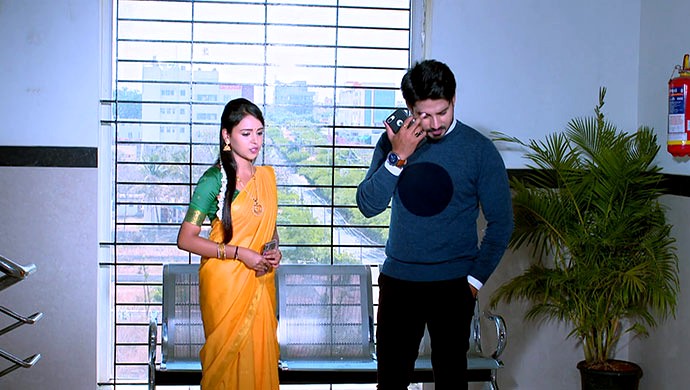 In the previous episode of Gattimela, Amulya gets insulted for showing sympathy to Vedanth. Soon, a massive face-off takes place between Parimala, Suhasini and Manjunath, in defence of their children. Luckily, to break it all up a piece of good news about Vicky’s recovery is given to everyone. Parimala has the last say in the conversation and they leave. Aarthi, too, is relieved to hear about this. Vicky, however, doesn’t appreciate Vedanth’s efforts to save him. Later, Parimala and Manjunath reach home and tell Aarthi about their incident at the hospital.

In tonight’s episode, after offering some water to Vicky, Vedanth gets to the point directly about his love life. Elsewhere, Padma informs her husband about her skepticim regarding Sarika and Vicky’s future prospects. Sarika overhears this conversation and gets enraged with her mother for even thinking of breaking off her proposal for Vicky. Aarthi, on the other hand sulks about the drastic step Vicky took and worries about what will happen next. While Adithi breaks her chain of thought by offering to help, Vedanth continues to probe about Vicky’s love.

Soon, Aarthi makes Adithi swear on her that no one else should know of her love for Vicky. A completely oblivious Amulya enters the room just then and inquires about the swear. Aarthi and Adithi somehow handle the situation when Amulya makes a shocking swear of her own. At the hospital, Vicky tells his brother about how nice he is as compared to his rude side he shows everyone. Despite all his attempts, Vicky doesn’t agree to disclose the details. Finally, Vedanth promises to make them one only if Vicky tells him the name of the woman he loves. In addition, Vikranth accepts that everything that happened to him is his own fault and no one else’s. When he doesn’t give out any information, Vedanth leaves the room.

At the Manjunath house, Anjali gets upset when her father applies oil to her head. Parimala then calls everyone for lunch but Amulya leaves on the accord of work. She then asks Amulya about who her boss is but the latter avoids the topic. Kanta comes to the hospital with Vicky’s call records much to Vedanth’s relief. He immediately starts going through them and calls up numbers to find out some information. When Kanta suggests calling the most dialled number, Vedanth appreciates his efforts.

Parimala and Manjunath are discussing getting the wedding cards printed when they get a call on the landline. Upon hearing a woman’s voice, Vedanth’s doubts are confirmed. He inquires about the address of the place but Amulya turns to be smarter than him. However, Vedanth already makes up his mind to get the address of this person by hook or by crook. For Amulya, she assumes that someone is playing a prank on her and continues to do time-pass with the caller. In the end, Amulya gives Vedanth an address alright, but where will it lead him? Will Vedanth find out about Vicky and Aarthi? Only one way to find out, stay tuned.

To continue the entertainment, watch the latest episodes of the hit show Paaru, streaming for free on ZEE5.

To Watch Padma Bhushan Veerendra Heggade On The First Episode Of The Fourth Season Of Weekend With Ramesh, Click Here

Shanvi Srivastava On Saheba: The Role Is Different And It Has Multiple Shades