In the next episode, as Vedanth is being dragged from the park in handcuffs he notices Amulya running alongside him and fighting with the cops for him 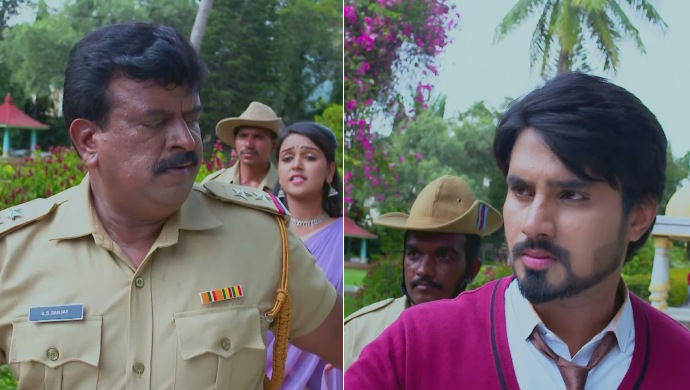 In the previous episode of Gattimela, Amulya gives Vedanth some lessons on love while Pari and her daughters sit at home and wonder what to do with the mess they are in. Much to their surprise, Vicky arrives there with a box. At the park, as Amulya starts talking romantically with Vedanth, he stands there staring into her eyes and listening to what she has to say. Vicky, on the other hand, reveals how he followed the goons and cleared all their dues. Just as Amulya asks Vedanth if he will be by her side their whole life and he is about to promise her the same, the police arrive there and arrest Vedanth.

On Monday’s episode, Amulya makes multiple attempts but Vedanth is handcuffed and paraded in the park. As they are walking out of the park, Vedanth notices Amulya in a distressed state and quietly looks at her and vice versa. The police inspector, however, doesn’t continue to slow down and Vedanth is forced to walk in front of everyone with handcuffs.

Will Vedanth really be taken to jail? What is Amulya going to do to bring justice to him? To find out you will have to stay tuned.

Did You Know That Samikshaa Likes Justin Beiber? Here Are 6 Other Cool Facts…

Huliraya Is A Film About A Forest Local Boy Who Under Peculiar Circumstances Finds Himself In The Big City. Click Here To Watch The Film Now On Your ZEE5

DKDFW2 EXCLUSIVE: 18 Pics From The 'Choreographers Round' This Week That You Ought To See