Tonight, Vedanth thinks that Amulya is hungry and prepares a dosa for her. Elsewhere, Aarthi finds Vicky's romantic gesture cute and kisses him again! 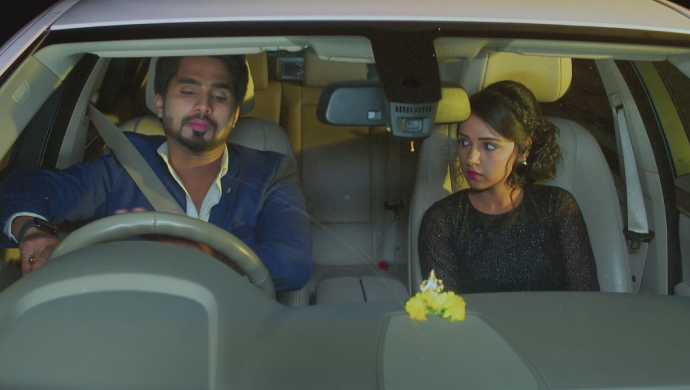 In the previous episode of Gattimela, Vedanth looks for Amulya and helps her get out of a difficult situation. A while later, Amulya assumes that the knock on her door is made by Vedanth but is shocked to see Kishore instead. He offers her the invite to come to his wedding but she rejects it causing him to show her an MMS clip of Aadya changing her clothes. Soon, Vedanth finds Amulya walking back home and offers to drop her home. Upon noticing that she is in silent mode, he decides to find food for her.

On tonight’s episode, Vedanth asks Amulya why she didn’t eat at the party even though there was so much food left. To this, a sad Amulya tries to reply with a poker face that she wasn’t hungry then and she isn’t hungry now. Vedanth gets uncomfortable when she speaks politely to him asking him to drop her home.

Finally, he stops at a roadside dosa stall just as the owner is about to close. Luckily for Vedanth, the son of the shop owner recognises him and gets excited. The next few words that come out of Vedanth’s mouth leave Amulya stunned. He addresses her as ‘his girl’ and requests the owner to make anything that is possible for her since she is hungry.

Thanks to the small boy’s requests, the man agrees to make some food for them. Back at home, Vikranth continues to be cute while being drunk causing Aarthi to smile at him with all her love. At the dosa stall, the owner is puzzled when Vedanth starts wearing the apron to prepare the food.

The man pleads to Vedanth to allow him to make food but the latter somehow convinces the man. He then goes to the cooking station and whips up some hot dosas while Amulya watches silently. Meanwhile, as Vicky thanks Aarthi for taking care of her and makes an attempt to leave, she pulls him back, says I love you too, kisses him on the cheeks and runs back into the house.

Vicky stands ecstatic rooted to his spot recollecting what happened while Vedanth serves both the owner and Amulya. Despite her initial protests, Vedanth forces Amulya to eat and she obeys silently. At the Vasishta house, Aadya’s grandmother vents out her feelings for Vedanth and his wedding.

Aadya then does all she can to console her granny and makes her feel better. Elsewhere, the owner thanks Vedanth for actually thinking about his tiredness and preparing dinner for him when the latter offers money for the small boy. Even though the boy’s father rejects the money at first, Vedanth asks him to keep it carefully for his son’s education or business.

He also presents the man with his card and asks him to connect if there anything he or his family needs. At the Ashwath house, Aadya confides in Sarthak about Ammu’s whereabouts after the party and they decide to call Vedanth to check if she is okay. At the stall, Vedanth notices that Amulya has still not eaten and asks her to eat up all the while staring at her.

Suddenly, Ammu starts hiccuping and Vedanth without hesitation takes the closet glass, fills it with water and makes her drink it. He also wipes off some food particle stuck on her face causing Amulya to let loose her tears. Vedanth is surprised at this and asks her what’s wrong.

Will Amulya tell him the truth? How is Vedanth going to react to what Kishore did? We’ll know soon.

Three Best Words That Suit The Gattimela Actor Rakshit Are Handsome, Dashing And…

Plea in SC for direction to seek details on COVID-19 from China, WHO to facilitate antidote development

Gattimela 22 November 2019 Preview: Amulya Is Moved When Vedanth Addresses Her As 'Family'