While Gautham comes home on the pretext of doing an important pooja for him and Aarthi, Amulya tries to seek a half day off permission from Vedanth. 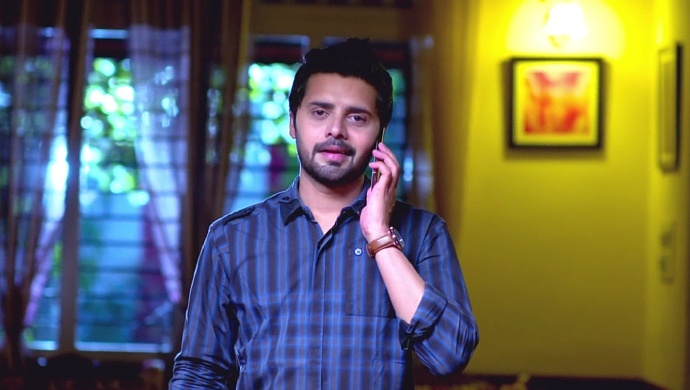 In the previous episode of Gattimela, Sarika gets angry upon seeing Vicky making Aarthi wear a ring he got in place of the one Gautham gave. Just as Aarthi is about to confess her love to Vicky, Parimala calls for her, which makes both of them panic. In an attempt to stop her from running away, Vicky pulls her back and gives her a kiss on the cheeks, much to her surprise. Soon, Vikranth breaks off the alliance with Sarika in front of all families, causing them to be stunned. Afterwards, Parimala catches Amulya with Vedanth and gets furious. She later accuses her of still working with Vedanth.

On tonight’s episode, much to Adithi and Aarthi’s astonishment, when Parimala asks Amulya to swear on God’s idol, in the pooja room, that she is not working for Vedanth, she does as asked. After their mother goes, Amulya explains to her sisters the reason for her doing so was so that Vicky and Aarthi can be together. She further clarifies why this swear on God doesn’t count. At the Vashishta mansion, Vedanth finds Suhasini worried and wonders if she found out about his trip road trip with Amulya. Luckily for him, she talks about how Vikranth insulted the entire Vashishta family by turning down Sarika’s alliance in front of everyone including Parimala. Just then Vicky enters the house. When Suhasini makes it clear about her intentions for Sarika as her daughter-in-law, Vicky too gives her a crisp reply by promising to forget his human side, if anyone forces him.

At the Manjunath house, Anjali assumes that her father is crying because of the TV show going on, but his tears turn out to be the result of cutting onions. Soon, Pankaja and Gautham pay a visit to their home. When she informs Parimala that her reason for coming to their home, is a pooja that has to take place between the to-be bride and groom, Aarthi and Amulya get worried. Even Parimala gets worried about arranging for a pooja so soon, but Manjunath accepts this decision of doing the pooja. At night, Aarthi calls up Gautham to find out what is going on. The former plays his cards right and proves to Aarthi that he is innocent. She then tells Amulya about her feelings and they find a solution together, without informing Vicky anything.

The next day at the office, when Amulya asks to take a half-day off, Vedanth is delighted to turn her down. At the temple, Aarthi worries about the extent Gautham’s family has gone to make the pooja grand. Meanwhile, Vicky tries to get in touch with Aarthi, but Adithi answers her phone and informs him that they can’t talk because they are in the temple. This makes Vicky decide that he will pay them a surprise visit. Amulya, on the other hand, is irritated when she later goes to Vedanth’s cabin to tell him that she’ll do any work she asks for a half-day and finds it empty. She then goes to his chair, hits it, and then speaks out all his flaws pretending to be him. In the process, she spills water on his laptop. In her attempt to escape she realises that Vedanth is already standing at the door.

Will Vedanth fire her for this blunder? How will Vicky react when he sees what’s going on in the temple? Only one way to know, stay tuned.

Watch 8MM Bullet, to see the Navarasa Nayaka in an entirely new avatar, streaming on the ZEE5 platform.

Did You Miss The Sriimurali Special Episode On Weekend With Ramesh Season 4? Don't Worry You Can Stream It Here On ZEE5

Yaare Nee Mohini 13-20 May 2019 Recap: Will Shanmugha Help Belli And Muttu Get Closer?

Gattimela 22 May 2019 Preview: Vedanth Tells Amulya About Her Task If She Wants Half-Day