In the next episode, Sharada enters the kitchen and is unable to recognise Amulya at first. Vedanth, who turns around is shocked to see Sharada there! 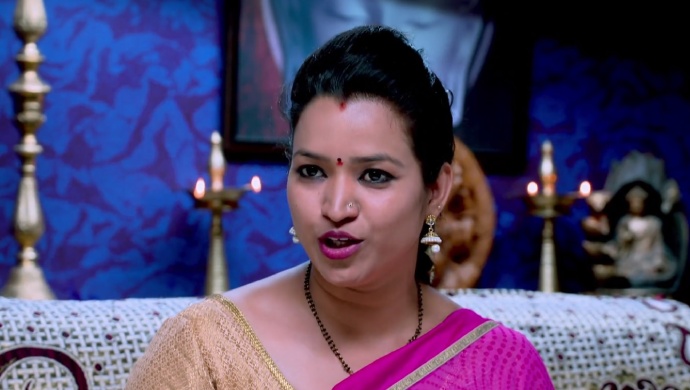 On the previous episode of Gattimela, Vedanth finally escapes Parimala’s questioning and goes to the kitchen, only to see Amulya talking to some women there. He gives them an excuse to send them away and shocks Amulya by being present in her house! While covers her mouth with his hand and she is screaming in disbelief, Aadya arrives there and comes to the conclusion that something going on between them. Elsewhere, Parimala, Sarthak and Sharada go to meet Aarthi but are surprised to find Vicky there. He, however, cooks up a story that he actually came to see his sister and thereby went to congratulate Aarthi too. Sarika doesn’t buy this story at all and is disappointed that Parimala didn’t do much. Later, Amulya and Vedanth accidentally pour flour on themselves in the kitchen and accuse each other of all the wrong in their respective lives.

On the next episode, an angry Vedanth tells Amulya not to be so one-track-minded just as Sharada enters the kitchen. He continues by telling her to understand how important this for him, given the fact that mustered the courage to come all the way to her house to speak with her. Sharada then calls out to Amulya as she is not able to recognise her with all the flour. Amulya acknowledges her while Vedanth closes his eyes and tries to recollect where he has heard this voice. In a shocking reflex, he turns and is shocked to see Sharada standing there.

Will Sharada recognise Vedanth? What will Vedanth do now? Stay tuned for tomorrow’s episode update.

Watch your favourite Kannada movies, streaming for you on your ZEE5.

If You Are A Fan Of Sharan Hruday, Watch His Comedy-Thriller Film Raambo 2, On The ZEE5 Platform This Weekend